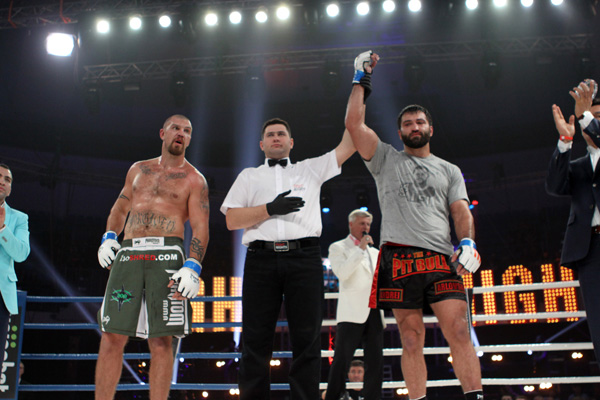 MOSCOW, Russia – Former UFC heavyweight champion Andrei Arlovski was visibly unhappy with his performance on in the Fight Nights "Battle of Moscow 9" headliner on Sunday night. Originally, the 33-year-old Greg Jackson protégé had plans to commend himself for a second stint in the Octagon with his fifth straight knockout, but in the end he had to content himself with a unanimous decision over a Mike Hayes who proved to be much tougher than expected. The three judges ringside scored the bout 30-27, 30-29 and 30-29.

Perhaps it was due to the added pressure of having to perform in front of his Russian fans for the first time in more than 11 years, or maybe it was because of Hayes’ great mobility and tremendous beard, but aside from a short spurt midway through the second round during which he was able to land some punches from top position, the Belarusian was never really able to put his stamp on the fight. Quite the contrary, it was Hayes who landed with more frequency and accuracy.

“I was a little let down by my cardio today,” Hayes told Sherdog.com after the fight. “I’m not making excuses, Andrei is a great champion and he deserves the win, but two more weeks to prepare could have added the fuel necessary to put even more pressure on him. I felt that I scored with a couple of really nice shots, but didn’t have the trust in my stamina to follow up with more decisive leather. I’m glad that I was able to prove to myself that I can hang with the best out there.”

In the co-headliner, top European flyweight and defending Fight Nights 125-pound champion Ali Bagautinov made short work of Germany’s Andreas Bernhard, but the ending was not without controversy. Combat sambo world champ Bagautinov dropped the Hamburg native with a quick left-right combo and followed up with a flurry of punches on the ground, which prompted referee Valentin Tarasov to stop the fight. Bernhard jumping right back up like a jack-in-the-box, making a strong argument that the action was halted prematurely.

On the undercard, Bellator-signed “Strangler” Murad Machaev lived up to his nickname as he choked out WFC welterweight champion Ivica Truscek in a 161-pound catch-weight bout. Truscek managed to land some punches early due to his awkward standup style, but Machaev soon took over with his wrestling and grappling prowess. A gargling rattle from the Croatian’s throat, prompted from a Machaev D’Arce choke, signaled to the ref that the fight was over.

More controversy overshadowed which was otherwise the “Fight of the Night” between excellent kickboxer Akhmet Aliev and Hungarian submission specialist Viktor Halmi. After a first round with a little advantage for the St. Petersburg native, Halmi came on strong late in the second stanza as he peppered his opponent with strikes from back mount. Despite having a clear view of the action, referee Tarasov missed an Aliev tap a minute before the end of the round. Aliev added insult to injury by knocking the luckless Halmi out with a liver shot in the extra round.