For years, Brazilian fans and fighters have dreamed that MMA would someday garner support from the country’s government. That dream was realized on Aug. 3, when Rio de Janeiro Governor Sérgio Cabral hosted a special ceremony to announce Bitetti Combat 4.

Promoted by Brazilian jiu-jitsu legend and UFC veteran Amaury Bitetti, Bitetti Combat 4 will take place Sept. 12 in MaracanÃ£zinho, Rio de Janeiro. Brazilian standouts Ricardo Arona, Paulo Filho and Pedro Rizzo will headline the event, none of which have fought in their homeland in years, if at all.

“It brings some hope,” Rizzo said. “When the UFC came to Brazil in 1998, we thought it was the beginning of a new era for MMA here, but it never happened. We had some nice events, but not a top one like the UFC. The proposal of Bitetti Combat is to put on a great show with some of the greatest Brazilian fighters inside the Octagon. So this event brings back the hope of having MMA growing in Brazil like it is in the U.S.A. and other countries."

Governor Cabral, who was presented an MMA glove by Bitetti inside a cage constructed in the gardens of governor’s palace, has guaranteed his support and launched a historical partnership with MMA.

“Rio already produced the Pan American Games last year. We were already chosen as the location for the next World Cup and we are in the running to get the next Olympic Games,” said Cabral. “It’s going to be a pleasure for us to bring our biggest martial arts idols here to perform at home.

“We already expelled drug dealers from four important slums (pacified communities), but to expel is not enough,” continued Cabral. “We have to provide citizenship to the local population and martial arts are one of our ways to make it happen. With the support of all the martial arts teachers and fighting idols, besides producing champions, we will be able to keep children from entering into the criminal life.”

Following the speech, Cabral’s 14-year-old son, Marco Antonio, who trains jiu-jitsu with the Brazilian Top Team, performed an MMA exhibition with Milton Vieira. Arona and Filho followed with another exhibition, where Filho submitted Arona with an armlock and Arona caught Filho in a choke. 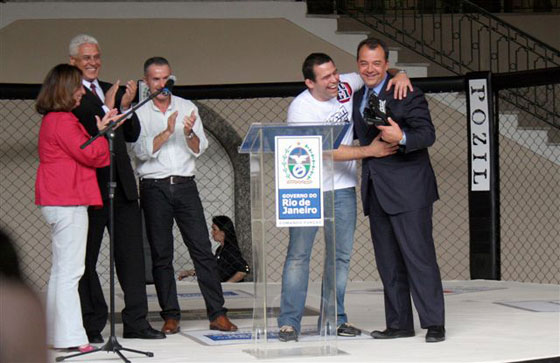 Rio Governor Sérgio Cabral embraces the sport. Photo by Marcelo Alonso.
Tom Huggins, a former producer of Extreme Combat, will assist Bitetti with the promotion. Renzo Gracie and “Big” John McCarthy have been asked to referee the event as well. Bitetti said that in addition to gaining financial support from the governor, the event would air live on Rede TV to the entire country on free television.

Arona, who has been absent from the ring for two years, said he’s anxious to make his return. He will face UFC veteran Marvin Eastman.

“I’ve just found out about my opponent and I haven’t seen any of his fights, but I already know that he is tough and has won against a couple of top guys and that just makes me more excited to train and make a nice presentation to my fans,” said Arona.

Scheduled to face “The Ultimate Fighter” alumnus and Sérgio Penha student Alex Schoenauer, Filho spoke of his opponent and the opportunity to fight in Brazil.

“I don’t think that he can be better than I am on the ground,” said the Carlson Gracie black belt. “Now I have to start studying him together with my trainers.

“We have some the best fighters in the world in this sport, but we don’t have recognition in our own country,” continued Filho. “I hope this event starts a new era in Brazilian MMA.”

Antonio Rogerio Nogueira had also been announced for the event, though his participation is now doubtful as he eyes a move to the UFC.