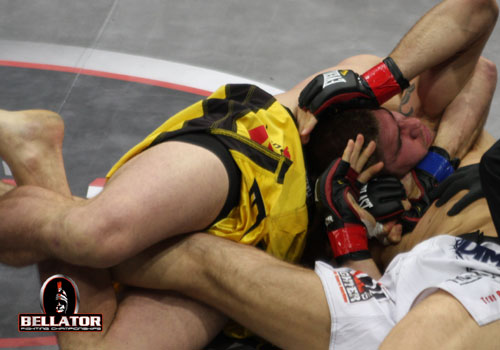 Askren will meet Thomas in the 2009 Bellator Fighting Championships welterweight tournament semifinals this Thursday at the Verizon Theatre in Grand Prairie, Texas. Their first encounter ended in controversy at Bellator 14 in April, when Askren defeated the UFC veteran with a first-round guillotine choke. Thomas never submitted to the hold, but the referee saw fit to end the match anyway.

The semifinalists have traded verbal barbs ever since.

“I thought it was going to take a little more squeezing to put him unconscious,” Askren told the Sherdog Radio Network’s “Beatdown” program on Monday. “The choke was in. He wasn’t escaping. I mean, he had no hope for escape. Whether he was out or not, he was going to be out soon enough. That’s why all his complaining and bitching and moaning is kind of getting old.

“In that instant, I guess, maybe the ref just misjudged it because of the way the dude looked,” he added. “I would just let people go to sleep. It’s not really going to hurt them that bad to go to sleep for a couple seconds.”

Thomas earned a second crack at the tournament when he replaced “Judo” Jim Wallhead in the draw. He stopped unbeaten Arizona Combat Sports prospect Jacob McClintock to set up the rematch with Askren, a four-time All-American and two-time national wrestling champion at the University of Missouri who competed in freestyle wrestling at the 2008 Olympics. Askren, a 25-year-old Cedar Rapids, Iowa, native, welcomes another matchup with Thomas.

“I’m one of the guys they’re hyping at Bellator,” he said. “The reason [Bellator founder and CEO] Bjorn [Rebney] gave me Ryan Thomas, first challenge, was because they thought he was someone I could beat fairly easily. Now, they’ve got a good reason to put me against him again. They’re happy. I’m happy. I’m going to whoop his ass again. I’m going to be in the finals in June, so we’re all happy.”

Askren thinks the rematch with Thomas will follow a path similar to that of their first encounter, which ended 2:40 after it began.

“I’m going to take him down, and I’m going to choke him,” he said. “I told him that last time. I did it. This time, it’s going to be more efficient. It’s going to happen.”