Ben Askren kept Dan Hornbuckle right where he wanted him.

Five takedowns, slick scrambling and effective ground-and-pound carried Askren to a unanimous decision in the 2010 Bellator Fighting Championships welterweight tournament final at Bellator 22 on Thursday at the Kansas City Power and Light District in Kansas City, Mo. Scores were 30-27 across the board for the brash 2008 Olympian.

“I pretty much told all you guys what I was going to do,” Askren said. “A few of you were smart enough to listen to me. A bunch of you doubted me. You’ll learn not to do that soon enough.”

A four-time collegiate All-American wrestler and two-time national champion at the University of Missouri, Askren overwhelmed Hornbuckle with takedowns, strikes from the top and pure positional dominance. At times, he seemed glued to the Sengoku veteran, who had won 19 of his last 20 fights entering the final.

Askren twice took down Hornbuckle in the opening period, mounting him with little more than a minute left. The second round followed a similar narrative, as the 25-year-old left Hornbuckle, bleeding from a cut near his right eye, with precious little room with which to work. Hornbuckle’s offense was limited to sporadic submission attempts, as his opponent racked up the points. He was never upright long enough to threaten Askren with strikes. 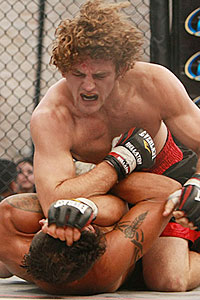 Dave Mandel/Sherdog.com
Askren outclassed Hornbuckle.
Hornbuckle had his chance in the third, as he swept Askren with a kimura from the bottom and wrenched his arm behind his back. The unbeaten Olympian wiggled free, however, and quickly moved back to a dominant position.

“He had me off balance,” Hornbuckle said. “Hat’s off to his wrestling. It’s the fight game. It’s what happens.”

The victory earns Askren a crack at undefeated Bellator welterweight champion Lyman Good later this year. A Team Tiger Schulman representative based in New Jersey, the 25-year-old Good has not competed since he stopped Omar de la Cruz on first-round punches to capture the Bellator crown more than a year ago. Askren had some pointed words for the champion.

“Keep my belt warm,” he said. “Shine it once a week, and enjoy it while you’ve got it, because it’s mine, baby.”