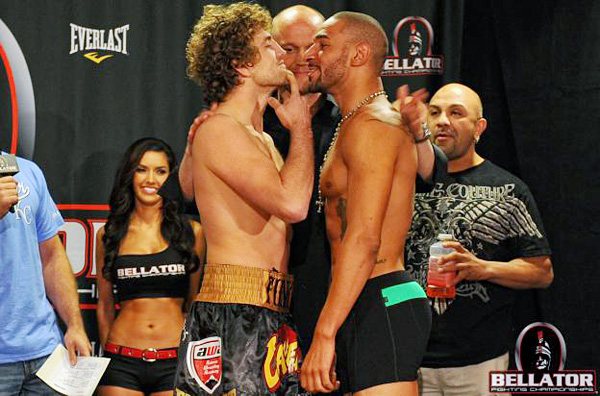 Bellator welterweight champion Ben Askren’s first title defense will go forward as expected, as both he and challenger Jay Hieron came in on point at Friday’s weigh-ins.

Topping the bill of Bellator 56, Hieron and Askren will collide at Memorial Hall in Kansas City, Kan. Airing live on MTV2, the event’s main draw will also feature the semifinals of Bellator’s ongoing heavyweight tournament.

A two-time NCAA Division I wrestling champion at Mizzou, Askren tipped the scales at 169.6 pounds ahead of his first fight since winning Bellator’s 170-pound championship from Lyman Good one year ago. Undefeated as a professional, “Funky” has compiled a perfect 5-0 record inside Bellator’s circular cage since joining the promotion in 2010.

Bellator’s Season 4 tournament winner, Hieron weighed in at 169.8 pounds prior to his title shot. A former International Fight League welterweight champion, Hieron competed for the UFC twice early in his career, dropping bouts in 2004 and 2005. The 35-year-old has not lost since 2007, winning 10-straight fights, culminating with a trio of victories in the Season 4 tournament last spring.

Prior to the main card broadcast on MTV2 and EPIX, the evening's preliminary proceedings will be highlighted by a welterweight contest pitting onetime Strikeforce talent Rudy Bears (169.6) against Bellator newcomer Marcio Navarro (169.8). Streaming live on Spike.com, the undercard will also feature a heavyweight contest between Daniel Gallemore (247) against Derrick Ruffin (242.6), as well as a 145-pound affair between Adam Schindler (145.8) and Jeremy Spoon (145.4).

* Ely, Tiller and Brooks were initially over the one-pound allowance. Ely and Tiller made weight on future attempts at the scale. The Brooks-de Souza bout will be at a catch-weight of 158 pounds.
SHARE ON FACEBOOK SHARE ON TWITTER
Related Articles
Latest News
+ VIEW MORE