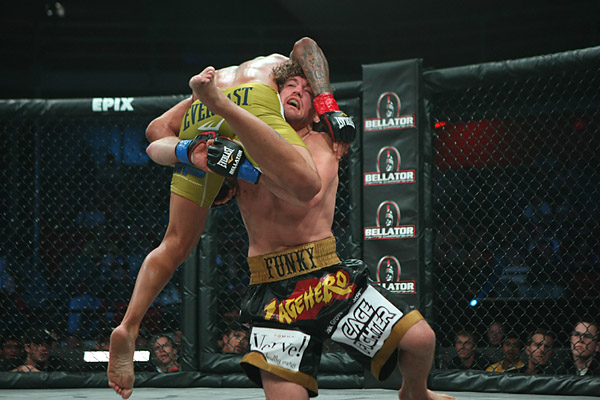 
KANSAS CITY, Kan. -- It was his biggest win to date, but Olympian and collegiate wrestling great Ben Askren just wasn't happy with his first Bellator welterweight title defense at Bellator 56.

Askren earned a well-deserved split decision (48-47, 48-47, 47-48) over UFC and IFL veteran Jay Hieron, using his celebrated wrestling to grind out the tough 25-minute verdict and retain his title at the Kansas Memorial Hall.

“I’m not happy with this whatsoever,” Askren said post-fight. “A win like this isn’t great, it doesn’t feel good. I need to get back to the drawing board.”

Hieron was the more effective fighter early on, as his low kicks and hard jabs kept Askren on the outside. Askren landed looping punches while rushing in, but couldn't get quality takedown attempts on the native New Yorker to get him on the mat. 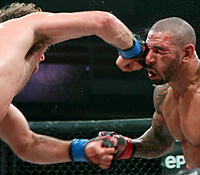 K. Mills
Askren wore Hieron down.
In the second round, Askren loosened up, and his powerful takedowns and natural feel for top-position grappling took over. From rounds two to four, the fight belonged to Askren, as he wore Hieron down with punching, pressure and passing attempts, mostly from half guard. Hieron was never out of the bout, but had little answer for Askren's wrestling.

Hieron had another strong round in the fifth and final frame, even putting Askren on the deck with a spinning back kick, but it was too little too late. Though judge Henry Gueary saw it 48-47 for Hieron, Mike Boyd and Kevin Champion had it 48-47 for Askren, also Sherdog.com's scorecard.

“That was a split, it could’ve gone either way … I’m supposed to be getting better,” said Askren, visibly disappointed in himself.

Despite dissatisfaction, the 27-year-old two-time NCAA national wrestling champion is now 9-0 in his career. Hieron falls to 22-5 with the loss. Askren will now meet the winner of the Nov. 12 Ben Saunders-Douglas Lima welterweight tournament final at Bellator 57.

“I don’t care [who I face]. Whoever wins wins,” Askren added. “I just need to get better, because that wasn’t even close.” Prescott, Ariz.'s Prindle threw a monster left hook just as Sparks leaned in for a low kick. The punch blew the doors off of Sparks, who was done before he hit the canvas, but Prindle got an extra two shots in for posterity.

With the win, the former U.S. Army boxing champion moves to 9-1. 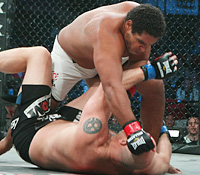 K. Mills
Santos mauled Grove.
Santos was slated to face sambo world champion Blagoi Ivanov, however, injury took the Bulgarian off the card. Facing British-based South African Neil Grove in his stead, the Brazilian quickly landed a looping right that put Grove down. Santos then locked up a no-hooks rear-naked choke for the tap, just as he did against Josh Burns three weeks ago.

The 24-year-old Santos and 35-year-old Prindle will meet in the Season 5 tournament final at Bellator 59 on Nov. 26 from Caesars Atlantic in Atlantic City, N.J., for the chance to challenge Cole Konrad for the Bellator
heavyweight title.