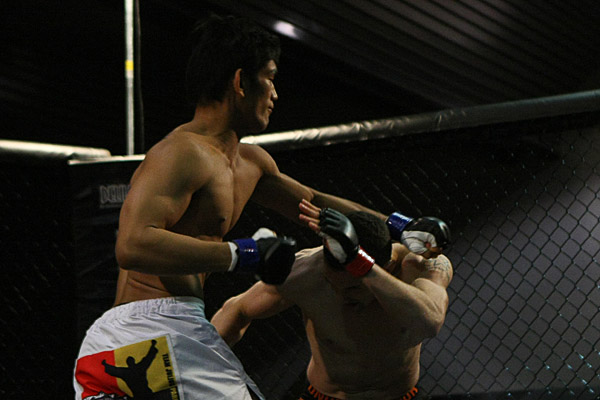 Having fortified itself as one of the northeast’s essential MMA promotions, Cage Fury Fighting Championship took its first steps in branching out Saturday evening, as middleweight Aung La N Sang capped CFFC 17 with a vicious knockout of Jason Louck in front of the first-ever non-Jersey CFFC crowd inside the Dover Downs Hotel and Casino in Dover, Del.

“The Burmese Python” began the bout slowly, taking punches to the face and body from the Iowan Louck. La N Sang kept moving forward, eating punches as he began to work his own offense. Partway into the first frame, La N Sang landed a left to the liver that sprang the Elkridge, Md., fighter into attack mode. A series of left hands stunned Louck, but it was a crushing right hook that finally laid his opponent to rest.

In the only light heavyweight bout of the night, Philadelphia’s Anton Berzin won a one-sided bout over Plainfield, N.J.’s Walter Howard. Rocco MMA’s Berzin was able to use his superior grappling skills to keep “The Iron Butcher” guessing. Through armbar attempts and scrambles, he was able to control the offense of the bout and he eventually secured a rear-naked choke at 3:53 of the first round.

After scrambles marked much of the first round, Berzin found himself on the bottom. He worked an omoplata to reverse position and take back control. From there, Berzin swiftly wrapped his arm around the neck of his foe and ended the bout from there.

Featherweights Myron Baker and Ben Syers shared the cage in a tale of two rounds. After spending the majority of round one fighting off a rear-naked choke, Baker was able to flurry on Syers with a brutal array of punches and knees which forced the stoppage he needed to win the bout at 1:14 of the second round.

Baker was taken down in the first frame and opted to play guard, searching for armbars. Syers effectively countered and reversed position to achieve back mount, but Baker valiantly defended the choke by tucking his chin and eventually working to his feet.

In the second round, Baker tagged his foe with early punches and stuffed the ensuing takedown attempt, responding with heavy uppercuts. Syers tried to stand up, but Baker poured on the punches and knees that put the finishing touches on the contest.

In the first professional contest of the evening, Queens, N.Y.’s Sergio da Silva locked up a triangle choke on Gregory Saumenig for his first pro win. “The Savage” was taken down early but worked a high guard for an armbar but was shucked off. He transitioned to an armbar to earn the tap at 1:52 of the bout.

Two amateur featherweight contests began the evening. Mike Shipman earned 30-27 scorecards, flurrying on Ibrahim Toure and working in a rear-naked choke as time expired in the third. In the opener, Andrew Hom attained mount on Damon Bonner and poured on the punches, which forced referee Todd McGovern to stop the bout just 95 seconds into the fight.

Several bouts planned for CFFC 17 were canceled at the last minute. A light heavyweight contest between Michael Wilcox and Ray Elliot was nixed when Elliot fell ill. Cedric Goodrich was penciled in to replace Elliot but could not be finalized and cleared by the Delaware Division of Professional Regulation.

Two amateur bouts – one between Lamar Dent and Josh Vann, as well as an amateur rematch between Arnold Nelson and Derrick Bradley -- were also scrapped after the DDOPR could not clear the participants.

The promotion will run its second show outside of New Jersey in just two weeks time, as CFFC 18 takes place at the Richmond Raceway Complex in Richmond, Va., on Oct. 27.