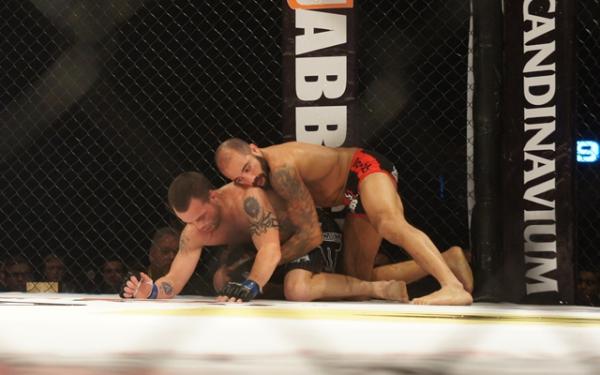 Aziz put on a show for his hometown fans at Scandinavium arena, earning a unanimous decision after three rounds.

The 41-year old showed no rust from his three-year layoff, landing jabs, combinations and even spinning kicks in the opening frame. Pulver looked to counter with left hands but was not able to find his mark. As the fight wore on, Aziz took control by implementing takedowns and ground-and-pound while keeping “Little Evil” on his back.

“I’m finished,” Aziz told Sherdog.com after the bout. “It is my time to maybe coach and help the sport outside of the cage.”

The show’s scheduled co-main event between Swedish UFC veterans David Bielkheden and Besam Yousef was not to be, as Bielkheden withdrew from the match just days before due to injury. Danny Mitchell stepped up to replace the “Brazilian Swede” and, after a feeling-out process in the first round, was able to get Yousef to the ground. Mitchell finished with a rear-naked choke in round two.

Finland’s Anton Kuivanen returned to his winning ways by beating another Nordic veteran, Gonzalez. Kuivanen rushed in and rocked the Swede with a combination which dropped “The Silencer.” The Finn waited for the referee to stop the fight, but it didn’t happen, so Kuivanen continued his attack and forced a stoppage.

“It was short but sweet,” said Kuivanen, who turned his fortunes around after suffering a first-round knockout against Eric Reynolds in September.

After the win, the former face of Superior Challenge, Reza Madadi, stepped into the cage to call out Kuivanen.

“It is still my belt,” said Madadi, a training partner of Gonzalez, referring to his status as Superior Challenge lightweight champion before being called up to the UFC.

Matti Makela and Matteo Minonzio were destined for a slugfest after an intense faceoff at Friday’s weigh-in where the two almost came to blows. After a back-and-forth battle, it was Makela who dropped Minonzio and leapt over the Italian in Superman-like fashion to finish the bout with strikes in the second round.

The crowd got on their feet during a wild bout between Norway’s Emil Weber Meek and Sweden’t Per Franklin. Meek appeared close to finishing the fight early with damaging strikes in round one, but Franklin landed a huge right hook which put Meek on skates. After regaining his composure, Meek continued his assault, wearing down Franklin until ground-and-pound in the second forced the referee to step in.

Swedish prospect Yosef Ali Mohammad kicked off the main card by unleashing a series of punches on Duarte Fonseca in an 8-second bout. Martin Akhtar followed with another beatdown against visiting Frenchman Damien Pighiera.

In other action, Allstars Training Center’s Michel Ersoy stopped Finland’s Perttu Paatola with power punches and knees to the face, while Linn Wennergren outclassed Angelica Babbi in the card’s only women’s bout. Mohammed Abdallah opened the show with a narrow unanimous decision against Erik Carlsson.

Ryan O’Leary is the founder of MMAViking.com.