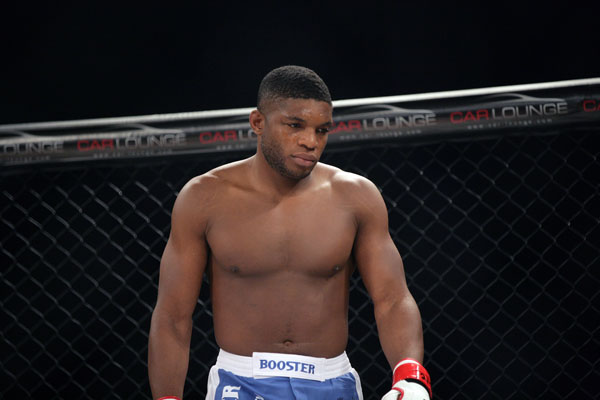 
Paul Daley produced a spectacular knockout in the BAMMA 14 headliner, putting Romario Manoel da Silva to sleep with a violent left uppercut 1:42 into the second at the LG Arena in Birmingham, England.

“Semtex” started the AXS TV-broadcast main event at a measured pace, gradually finding his range with chopping low kicks before landing his jab to da Silva’s head and body. As the first frame waned, both men started to throw more freely, a trend which would carry over into the second stanza.

Daley began to throw his right hand more frequently to open the middle period, cracking “Junior Killer” with a sharp right hook. Da Silva gamely returned fire, but it would soon matter little, as Daley faked an overhand that caused the Brazilian to raise his guard, leaving him exposed a moment later for the vicious left uppercut that instantly turned out his lights and caused him to slump lifelessly to the canvas.

“I heard my corner say to throw the overhand right. One of them caught him, but I could see he was expecting it, so I faked [another] one. He thought I was going to go with the right again, but then I threw the left,” Daley said. “I knew [the fight was over]. You can tell by the way they fall. He wasn’t getting up from that.”

Mansour Barnaoui successfully defended his BAMMA lightweight title in the evening’s main event, submitting UFC alumnus Colin Fletcher with a rear-naked choke to close out a wild first round.

Barnaoui burst out of the gate guns blazing, blitzing “Freakshow” with a barrage of punches and dropping him with a sharp left hook. Though Fletcher popped right back to his feet, he was met with more punishment, as “Tarzan” drilled him with knees from the Thai plum and hard right hands from a single collar tie.

“The Ultimate Fighter: Smashes” finalist managed to turn the tables briefly, however, connecting with a crisp flurry of punches that snapped Barnaoui’s head back and sent him to the canvas. The Englishman quickly pounced and tried to finish the fight with a brabo choke, but Fletcher could not find his squeeze.

After wriggling free of the hold, the champion took Fletcher’s back during a scramble and locked up a body triangle, trapping the Brit’s arm in the process. With only one hand left to play defense, Fletcher could not prevent the 21-year-old titlist from locking up a rear-naked choke and coaxing the tap 4:00 into the opening frame.

“I trained very hard, and I didn’t take [Fletcher] lightly. I was really ready, and I knew what I needed to do,” Barnaoui said through a translator. “I didn’t even want to imagine that [he] would finish [me]. I didn’t have any room for that. I just wanted to go and finish it. I don’t have any fear. I’ll fight anyone.”

Bellator veteran Jim Wallhead violently knocked out French talent Florent Betorangal to kick off the evening’s televised broadcast, hoisting the 30-year-old with a high crotch before slamming him into unconsciousness early in the third round. “Judo” followed the high-impact takedown with a pair of superfluous elbows from side control, signaling referee Marc Goddard to halt the bout and award Wallhead the eighth knockout victory of his career.

Earlier, French featherweight Tom Duquesnoy put forth a dominant performance against James Saville in their undercard contest, controlling the 145-pound confrontation from start to finish. Duquesnoy floored the Englishman with a hard left hook in the first round and then stuffed the 23-year-old’s increasingly desperate takedown attempts in the second stanza before pounding out “Scraps” with 56 seconds remaining in the period.