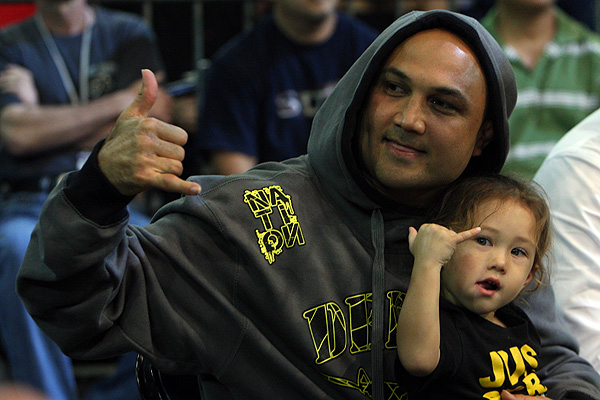 B.J. Penn may be on his way back to the Octagon.

The former two-division champion recently responded to a public proposition made by Rory MacDonald on Monday, when the Canadian announced on “The MMA Hour” that he would like to fight Penn at UFC 152 in Toronto. “The Prodigy” accepted the challenge the following day on BJPenn.com.

The bout is by no means official. UFC 152 does not take place until Sept. 22, and no bookings have been revealed for the event by the promotion.

Penn, 33, captured the UFC welterweight title in 2004, submitting reigning champion Matt Hughes with a rear-naked choke at UFC 46. The Hawaiian then won the promotion’s lightweight belt nearly four years later, using the same submission to finish Joe Stevenson at UFC 80. Penn relinquished that title to Frankie Edgar in 2010, the start of a 1-3-1 stretch for the former jiu-jitsu world champion that most recently saw him drop a unanimous decision to ex-Strikeforce champion Nick Diaz at UFC 137 this past October. Penn revealed his intention to retire after the bloody bout, but that announcement now appears to have been premature.

Eleven years younger than Penn, MacDonald is regarded by most as a blue-chip welterweight prospect. The lone loss of the Canadian’s pro career came to future interim UFC titlist Carlos Condit, who finished MacDonald via technical knockout with just seven seconds remaining in their competitive bout at UFC 115. Since that 2010 defeat, MacDonald has posted a trio of wins, besting Nate Diaz and Mike Pyle before finishing Che Mills with strikes at UFC 145 on April 21.