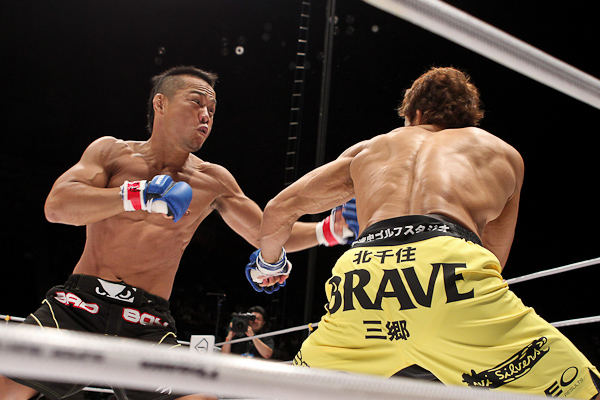 “We wanted to carry on the tradition of New Year’s Eve events, but it would be somewhat difficult to do so without partners,” claimed Sasahara before introducing Dream’s new cohorts, Glory Sports International.

“We intend to be very active in Japan and we're here to stay. We intend to have many more shows next year. Maybe ten,” claimed bullish GSI chairman Pierre Adurman, who vowed to bring combat sports in Japan back to their “former glory.”

“Japan is a very special place for me, it's almost like my second home. For over twenty years, I've been involved with almost every big fight show in Japan,” reminisced Golden Glory gym boss, Bas Boon. “I'm very happy that these two gentlemen next to me [Andurmann and Nectar Capital chairman Scott Rudmann] have an interest in fighting sports, and that they've come with a long-term plan to revive fighting sports in Japan.”

Perhaps best known for their affiliation with the kickboxing and MMA gym network Golden Glory, GSI made headlines in June with their acquisition of rival Dutch kickboxing event, It’s Showtime. Their New Year’s Eve partnership with Dream is purportedly the second half of a two-part plan--the initial half of which will be the Glory 4 kickboxing tournament scheduled for Dec. 2 at Makuhari Messe.

“I think we'll keep the tradition alive to have some [kickboxers] make their debut in [Dream], to see if they can fight in MMA,” said Boon. “Of course, we have [Sergei] Kharitonov, Semmy Schilt and a stable of guys under our management who can do MMA and kickboxing as well. I think that after the Dec. 2 show in [Chiba], we'll look at who's really popular, who came out uninjured, and who can compete on the Dream show.”

Broadcast details have not been settled as of Thursday's press conference, however Dream representatives have indicated to Sherdog.com that they intend to offer the event domestically via cable and online pay-per-view. Also in the works are international broadcast plans, although a carrier has yet to be decided upon.