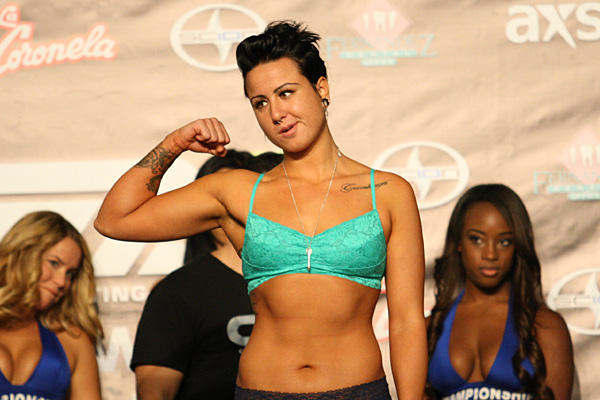 
Ashlee Evans-Smith began her professional mixed martial arts career in March, when she signed up for Championship Fighting Alliance’s eight-woman tournament. Seven months later, she put her name on the map by fighting -- and beating -- transgender fighter Fallon Fox.

“I am appreciative to Fallon in a way for putting me in the limelight,” said Evans-Smith, who recently agreed to terms with the World Series of Fighting. “I might be known as the girl who fought Fallon for the next couple of fights or until I knock out someone more prestigious, but I’m just going to accept that.”

Evans-Smith was the subject of some controversy after she publicly stated that she believes there should be a separate division for transgender fighters, even after walking away with the CFA title.

“You could take that however you want,” said Evans-Smith, who finds it upsetting that some people have labeled her homophobic. “You can say, ‘Oh, she’s homophobic. She’s afraid to fight her.’ But what did I do? I was one of the very few women on the pro level -- not amateur level, on the pro level -- that agreed to get in the cage and sign a bout agreement and fight Fallon. Not only did I agree to fight her, I never spoke ill of her. She tried to have some witty trash talk on Twitter, and I just didn’t do it.”

Evans-Smith comes from a wrestling background. She started wrestling as a sophomore in high school and continued her career at Menlo College in Atherton, Calif. She now trains at Subfighter MMA and gets her strength and conditioning at Innovative Results in Costa Mesa, Calif., three days a week, working alongside MMA fighters such as Jessica Penne and Ian McCall. Evans-Smith had a long amateur career. Since turning pro, she has stated that she plans to cut down to bantamweight in order to have access to more opponents. She even tried out for Season 18 of “The Ultimate Fighter.” The show was admittedly difficult for her to watch.

“It was bittersweet, to be honest,” Evans-Smith said. “It was nice to see the girls do so well, but at the same time, it was bitter knowing that I could’ve done just as good if not better than those girls.”

Instead, Evans-Smith has found her new home with the World Series of Fighting, although the promotion has yet to sign any other women at 135 or 145 pounds.

“Hopefully, World Series will take me under their wing and help me build my career,” Evans-Smith said. “I’m really looking forward to whatever they throw my way. I just hope it’s soon.”

While it may sound cliché, the unbeaten Evans-Smith (2-0) claims she will be willing to fight anyone the WSOF puts in front of her.

“I’ve never said no to a fight, even in my amateur career and now in my pro career,” she said. “As long as the fighter is going to challenge me, I don’t want to pick and choose my fights. I just want to fight people who are really going to test me and make me a better fighter and show everyone what kind of skills I have. Anyone who’s going to challenge me and help me put on an exciting fight and show the world that I’m a good fighter, I’m down to fight them. There’s so many talented female fighters out there.”