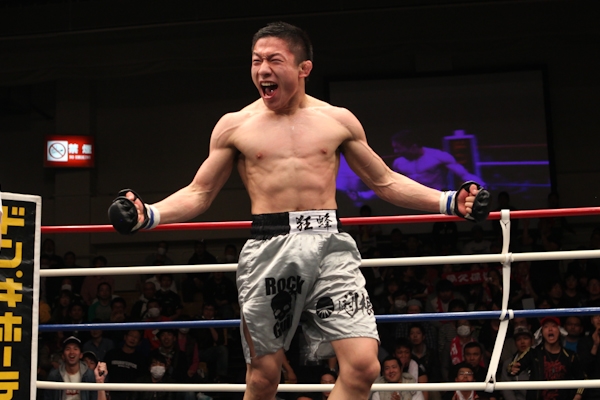 It was clear from the onset of the bout that defending champion Ogikubo wanted nothing to do with Horiguchi’s vaunted punching power, anxiously shooting for a takedown in the opening seconds. Horiguchi saw the shot coming and managed to stay on top, pounding on Ogikubo from open guard before getting overzealous and having his position reversed. The champ quickly took mount and attacked Horiguchi, but soon found himself standing up again. Post-fight, Horiguchi expressed little concern about the dangerous position, saying “I felt like if I stayed calm, I’d be ok in that situation.”

Ogikubo quickly dropped for another takedown attempt which Horiguchi stuffed, throwing more punches as Ogikubo turtled to defend before getting back to his feet. In the final seconds of the round, Ogikubo was able to score a takedown, but made little progress before the bell cut him short.

Round two started out much the same as the opening frame, with Ogikubo shooting anxiously and being stuffed. Horiguchi put the champion on his knees and pounded him with hard punches.

“I knew my shots were hurting him,” said Horiguchi. “He was turning his head to try and make me hit the back of his head, and I thought that was a pretty cheap move.”

Ogikubo weathered the storm of hammer-fists and returned to his feet, where he immediately shot for another failed takedown. This time, Horiguchi whipped around to the back, sunk in his hooks and finished with the choke. At the 1:35 mark, Ogikubo tapped and the new champion stood, smiling, as spectators screamed his name in unison.

The win is the fourth consecutive for the 22 year-old, who has brought himself some attention as a hot prospect with his powerful finishing abilities. When asked what his next step might be, Horiguchi said, “Of course, I’m aiming for the UFC, but I haven’t thought about what I’ll do next yet.”

Yachi used his lanky frame to pepper Hoshino with lunging punches and hard kicks to the body over the course of the three-round fight. Hoshino landed shots of his own, but Yachi’s speed and constant use of feints was too much for the former Cage Force champion. Hoshino’s lone moment of dominance came in the second round; after slipping during a high-kick attempt, Hoshino quickly scrambled and took Yachi to the ground with a double-leg takedown. Hoshino quickly passed to side control, but was stopped there by the bell. In the end, judge Hiroyuki Kanno scored the fight 30-28 for Yachi, while judges Tanaka and Suzuki saw it closer at 29-28, still giving the unanimous decision to defending champion Yachi.

Shooto pioneer and UFC vet Caol Uno earned an easy win over late replacement Kyu Hwa Kim in their 143-pound bout, forcing the Korean to tap late in the opening round to a rear-naked choke. Uno used his veteran wrestling skills to take the inexperienced Korean to the ground and gain advantageous positions before attempting submissions, looking for a “Kadowaki Special” choke before settling for a normal, hooks-in rear-naked choke. Referee Toshiharu Suzuki called a stop to the fight after Kim tapped at 4:09 of the first round. The win is only the third in the last 10 fights for Uno, who admitted to be in the twilight of his career but claimed, “I’ve still got a little left in me.”

Former bantamweight King of Pancrase Manabu Inoue fell to Shooto up-and-comer Kenji Yamamoto by unanimous decision in their 132-pound bout. Yamamoto spent the first two rounds defending Inoue’s seemingly endless takedown attempts, putting the U.W.F. Snakepit product on his back multiple times, but failing to do much damage. In the third round, the flow of the fight changed completely and both fighters decided to slug it out for the remaining five minutes. Yamamoto got the better of the wild exchanges and came close to finishing Inoue with a tight guillotine attempt. After 15 minutes, judges Kanno and Suzuki scored the fight 30-27, and judge Tanaka scored it 29-28, all in favor of Yamamoto.

Former champion Hideki Kadowaki returned the Shooto ring, albeit briefly, only to find himself on the receiving end of a 49-second knockout at the hands of Hiroshige Tanaka. The two fighters got into a wild exchange early and Kadowaki ate a hard hook that put him on wobbly legs. Tanaka chased the Wajyutsu Keishukai grappler around the ring before finally landing the KO punch in center ring. Kadowaki was out before he hit the ground, and referee Suzuki dove in to stop the fight only 49 seconds into round one.

Another Krazy Bee prospect, Masatsugu Sakaki, survived a close guillotine attempt from Kenichiro Togashi in round one, going on to win a close fight by split decision after three frames. Sakaki used strong takedown defense and superior striking to earn scores of 29-28 from judges Tanaka and Suzuki, while judge Kanno alone saw it 29-28 for Togashi.

At 167 pounds, Yoichiro Sato got the better of his striking exchanges with Kenta Takagi over the course of their two-round fight, earning a split decision win with 20-18 scorecards from judges Kanno and Suzuki, though judge Tanaka scored the bout 20-19 in favor of Takagi.