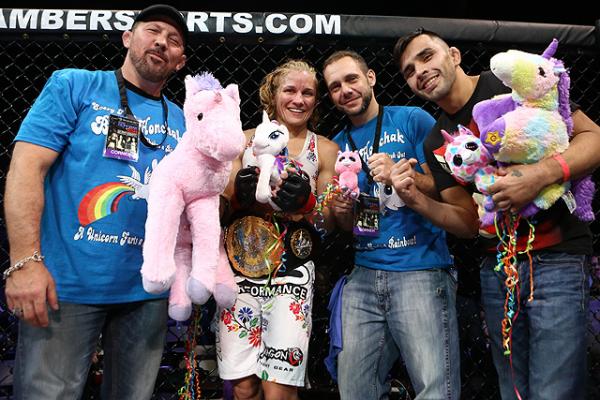 “The Little Warrior” retained the Invicta Fighting Championships flyweight title with a unanimous decision over Hashi in the Invicta FC 9 headliner on Saturday at the River Center in Davenport, Iowa. Honchak (10-2, 5-0 Invicta) swept the scorecards with 49-46, 50-45 and 50-45 marks, as she recorded her ninth consecutive victory.

Aside from a pair of takedowns, Hashi (15-5-1, 0-1 Invicta) was ineffective. Honchak repeatedly corralled her along the fence, uncorking the occasional standing elbow but mostly controlling the Japanese judoka in tight spaces. Not much took place on the feet, outside of a few Honchak leg kicks and sporadic jabs from both women. A Pat Miletich protégé, the 35-year-old champion has not lost a fight since suffering back-to-back decision defeats to Cat Zingano and Angela Magana in 2010.

In the strawweight co-main event, Karolina Kowalkiewicz kept her perfect professional record intact with a split decision against Japanese prodigy Mizuki Inoue. All three judges scored it 29-28, two of them siding with Kowalkiewicz (6-0, 1-0 Invicta). 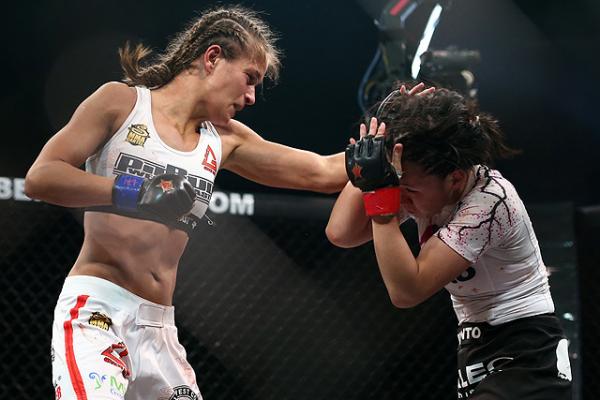 (+ Enlarge) | Photo: D. Mandel/Sherdog.com
Kowalkiewicz's incredible workrate earned her
the win in a battle of elite prospects.
Inoue (8-3, 1-1 Invicta) spent much of the 15-minute matchup navigating the length of the KSW veteran. Kowalkiewicz kept the 20-year-old on the end of her punches, unleashing powerful combinations. Inoue did her best work in round two, where she executed a takedown, settled in side control and later climbed the Pole’s back. In position for a potential choke, Inoue fired away with distracting punches, only to see Kowalkiewicz force a third round.

The two strawweights held nothing back down the stretch, trading liberally at a distance and in close quarters. Kowalkiewicz did just enough to spring the upset.

Young (7-9, 0-4-1 Invicta) enjoyed early success, as she opened multiple cuts on the Hawaiian with crisp two-, three- and four-punch combinations. However, her momentum proved fleeting. Pa’aluhi struck for a takedown in the second round, transitioned to mount and eventually settled on the Minnesotan’s back. From there, she piled up points with unanswered punches and sought the finish via rear-naked choke. Young survived, but her confidence was shaken. The scene repeated itself in round three, where Pa’aluhi landed another takedown and moved to mount before shifting to the back and nearly finishing it with punches and hammerfists.

Once viewed as one of women’s MMA’s most promising prospects, the 29-year-old Young is winless in her last five appearances. 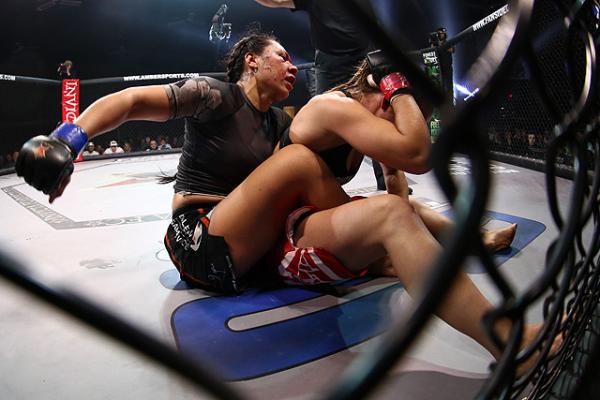 (+ Enlarge) | Photo: D. Mandel/Sherdog.com
Pa'aluhi gritted out a tough, bloody win.
Elsewhere, Jackson-Wink MMA product Jodie Esquibel struck in combination and mixed in timely takedowns, as she took a unanimous verdict from Nicdali Rivera-Calanoc in a featured atomweight duel. All three judges scored it the same: 30-27 for Esquibel (5-1, 3-1 Invicta).

Outside of a desperate guillotine choke attempt in the waning seconds of round three, Rivera-Calanoc (8-8, 1-3 Invicta) spun her wheels. Esquibel punched effectively to the head and body behind a consistent jab, all while sprinkling in various kicks. The 28-year-old executed takedowns in the second and third rounds, showing her superiority in all phases.

Rivera-Calanoc has lost four of her last five fights.

Finally, Pancrase and King of the Cage alum Amber Brown eked out a split decision over Team Quest’s Liz McCarthy in an atomweight showcase. Two of the three cageside judges scored it for Brown -- 30-27 and 29-28 -- while a third cast a dissenting 29-28 ruling in favor of McCarthy. 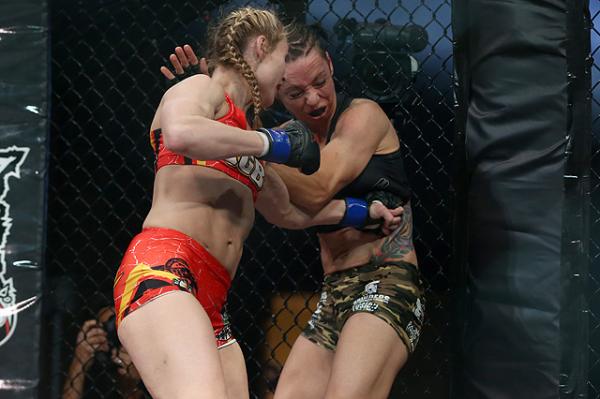 (+ Enlarge) | Photo: D. Mandel/Sherdog.com
Lee brutalized Sinn with her striking.
Brown (4-1, 1-0 Invicta) benefitted from a bloodletting. The 25-year-old New Mexican opened a gnarly gash above McCarthy’s right eye with a second-round knee strike. Before long, blood covered both fighters and much of the canvas. Brown also did effective work in close quarters, firing knees from the Thai clinch along with a few standing elbows.

McCarthy (2-2, 1-2 Invicta) leaned heavily on takedowns and her top game -- she also attempted an armbar -- but the damage she absorbed overshadowed her efforts.

In preliminary action, Amanda Bell (3-2, 1-1 Invicta) put away Maria Hougaard Djursaa (5-6, 0-1 Invicta) with punches 4:55 into the first round of their lightweight scrap; Karate Mafia’s Andrea Lee (2-0, 1-0 Invicta) bagged a unanimous decision against Shannon Sinn (1-2, 0-1 Invicta) in their three-round battle at 125 pounds, drawing 30-27 nods from all three judges; Syndicate MMA export Jamie Moyle (1-0, 1-0 Invicta) took a unanimous verdict from Jenny Liou Shriver in their 15-minute strawweight encounter, sweeping the scorecards with 30-27s across the board; and Last Stand Fight Team’s Kelly McGill (2-0, 1-0 Invicta) claimed a unanimous decision over newcomer Maegan Goodwin (0-1, 0-1 Invicta) in a three-round clash at 145 pounds, earning 30-27, 29-28 and 29-28 marks from the judges.