Coming off a four-fight stint in the WEC, the Jackson’s Mixed Martial Arts product came into his Saturday night bout against Johnny Bedford hoping to string together a few quality wins to earn a UFC contract at 135 pounds. Instead it was Fort Worth, Texas, resident Johnny Bedford who gave the impressive audition, shocking Gomez and Albuquerque’s Hard Rock Hotel and Casino crowd with a rear-naked choke just 94 seconds into the fight.

“I knew I was gonna come out and push the pace on him,” said Bedford, a veteran of 26 professional fights. “I doubted his cardio. I doubted his will. I thought he was a good competitor, but I thought I could break him. I didn’t plan on winning in the first round.”

Bedford came out aggressive from the beginning, throwing a low kick followed by a jab that partially closed Gomez’s eye in the fight’s opening seconds. Trainer Greg Jackson said it was the jab that ultimately led to Gomez’s demise.

“I think Frank just got caught. He got hit with a right hand, and I don’t think he really recovered from that. It hurt him a little bit, and he just zigged when he should have zagged,” said Jackson. “It was a great scramble, he just went the wrong way on the scramble and he got caught.”

Bedford, meanwhile, feels like bantamweight is where he’s strongest after compiling a 6-1 record in the division. 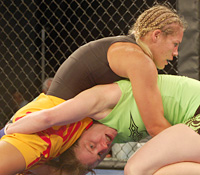 Kedzie, who withdrew from a previously scheduled bout against D’Alelio in September to film the MMA-based reality show “Ultimate Women Challenge,” was able to stuff or reverse the majority of her opponent’s takedowns throughout the fight while delivering sharp jabs and combinations.

“She’s incredibly strong, and her wrestling was very, very technical. I was just really prepared,” Kedzie said post-fight. “It sounds cocky, but it’s my team. They got me ready. Greg knew what she was going to be doing, and we worked against it.”

The larger D’Alelio landed some knees in the clinch with Kedzie pushed up against the cage in the bout’s opening round and nearly secured an armbar at the end of the second frame, but the majority of the bout was controlled by Kedzie’s boxing.

“I actually hit her with some overhands that I thought were going to put her down, but she’s so tough,” Kedzie said.

The Indiana native had been contemplating a move down to 125 pounds prior to the fight, but her performance against a bigger, stronger adversary has given her reason to reconsider.

“I’m actually hoping I can balance between the two [weight classes], but we’ll see,” she said. 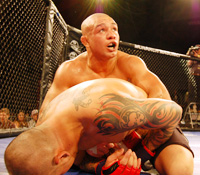 D.S. Archuleta
BJJ black belt Diego Brandao
(top) submitted Richard Villa.
Brazilian jiu-jitsu black belt Diego Brandao submitted a game Richard Villa with a rear-naked choke at 3:31 of the second round of their lightweight match. The Manaus, Brazil, native complained to referee Raul Barata that Villa was grabbing his gloves while the two were engaged on the ground. The combatants exchanged heated words immediately following the bout’s conclusion but embraced after the decision was officially announced.

“The Ultimate Fighter 9” alum Frank Lester, now stationed in Albuquerque after training with Dan Henderson’s Team Quest in California, stopped Albuquerque’s Josh Lanier at 2:32 of the second round of their 185-pound bout.

It was a successful pro debut for Clint Roberts in the initial main card bout. The Jackson-trained fighter submitted Silver City, N.M., native Matt Madrid with a triangle choke at 3:08 of the first round.

The Jackson’s MMA team went 5-0 in the card’s amateur bouts, giving the acclaimed gym a 9-1 overall record on the evening.

Lionel Lanham floored Silver City's Robert Rivera with an overhand right early in their 205-pound bout, opening up a significant gash over Rivera’s right eye and finishing with strikes on the ground just 43 seconds into the bout.

While trying to escape from full mount, Team Pueblo’s Adam Soto rolled into the rear-naked choke of Tim Dennison at 2:40 of the first round of a lightweight bout.

Adam Gonzales kept Team Pueblo’s Jose Caro on his back for the majority of their middleweight fight to earn a unanimous decision (30-27, 30-27, 30-27) in his amateur debut.

Johann Perez of Jackson’s MMA armbarred Ray Orosco at 2:30 of the first round of their bantamweight contest.