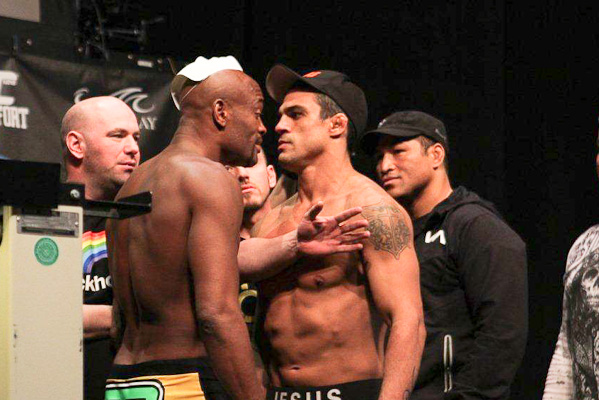 Vitor Belfort (right) could be back in middleweight title contention. | File photo/Sherdog.com

The 36-year-old “Phenom” earned his third consecutive victory Saturday night when he knocked out Dan Henderson in the light heavyweight main event of UFC Fight Night 32 at Goiania Arena in Goiania, Brazil.


Advertisement
With the win, Belfort avenged a 2006 defeat to Henderson, who handily outpointed the heavy-handed southpaw at Pride 32. The defeat was the first knockout loss for Henderson, who had never before been stopped with strikes in 39 pro outings.

His score with Henderson now evened, Belfort is eying a second shot at the UFC middleweight title, which will be up for grabs next month when Chris Weidman defends the belt against Anderson Silva.

“I’m looking right now for the winner of Silva-Weidman, but [UFC President] Dana White makes the call,” Belfort said at the UFC Fight Night 32 post-fight press conference. “I told them I’ll be ready, but [good] things come when you work hard. I just gotta be willing to take the risk and go forward.”

Belfort previously met Silva in a 2011 title shot that ended when “The Spider” landed a snapping front kick to Belfort’s jaw. Though a rematch with Silva would no doubt provide a fitting climax to Belfort’s recent string of knockouts, Belfort is primarily concerned with fighting whoever walks away with the belt at UFC 168.

“As fighter, we can’t have preferences. We have to fight whoever is champ,” said Belfort. “Cutting weight was much easier this time. Now I have to look at my diet and eat less at home.”

White agreed that a title shot is likely next for Belfort, who has earned three head-kick knockouts in 2013 alone. Should Silva regain the championship next month, White believes that a rematch between the Brazilians could do big business in the birthplace of vale tudo.

“The 185-pound division is exciting. It’s really getting good,” said White. “[There will be] nothing but big fights for Vitor. Imagine if we did a rematch [between Silva and Belfort]. We could do that in a soccer stadium here.”
Related Articles
Latest News
ALLUFCBELLATORPFLONE