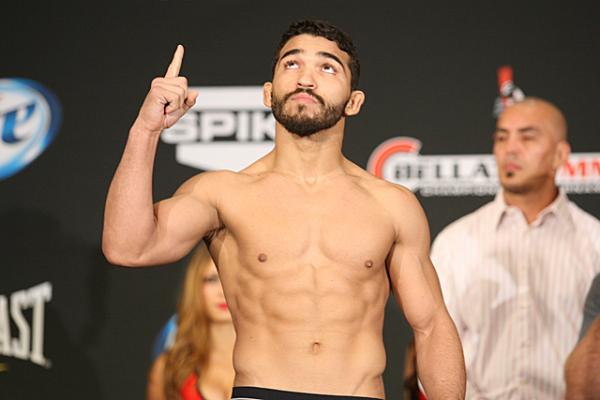 Promotion officials revealed the complete Bellator 107 lineup on Monday. The event takes place at Revel Atlantic City in Atlantic City, N.J., and is headlined by a middleweight title tilt between Alexander Shlemenko and Doug Marshall. The evening’s main card also includes a bantamweight scrap between Marcos Galvao and Tom McKenna, as well as a welterweight showdown pitting Nah-Shon Burrell against Dante Rivera.

Freire began his tournament run with a first-round knockout of UFC veteran Diego Nunes on Sept. 13 before taking a unanimous verdict over Fabricio de Assis Costa da Silva earlier this month. “Pitbull” is 8-2 under the Bellator banner overall, with his only losses coming to Joe Warren and Pat Curran.

A member of the American Kickboxing Academy, Wilcox punched his ticket to the 145-pound final by submitting Akop Stepanyan at Bellator 99 and outpointing Joe Taimanglo at Bellator 103. The Strikeforce veteran has gone the distance in nine of his 13 career triumphs.

Galvao will be making his first Bellator appearance since being knocked out by Nova Uniao teammate Eduardo Dantas in a 135-pound title bout in February. Since that defeat, “Loro” notched a second-round TKO triumph over Shely Santana at Shooto Brazil 40 in June.

A two-time veteran of the Super Fight League, McKenna will be making his promotional debut against Galvao. Six of the Louisville MMA product’s seven career victories have come by way of submission.

Burrell was released by the UFC earlier this summer after posting a 1-1 record with the Las Vegas-based promotion. The 23-year-old debuted in the Octagon with a decision triumph over Yuri Villefort before dropping a three-round verdict to Stephen Thompson at UFC 160.

Rivera is looking to rebound from a decision loss to Lyman Good in his initial Bellator foray. The 38-year-old’s lone UFC appearance came in June 2008, when he lost to Matt Riddle at “The Ultimate Fighter 7” finale.