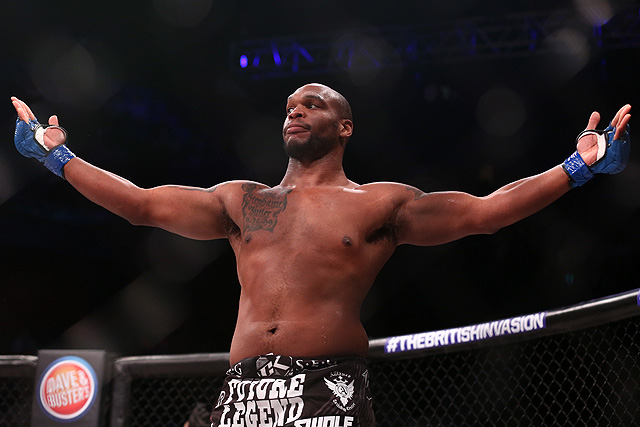 Despite four wins in Bellator, Raphael Butler has yet to break through. | Photo: Dave Mandel/Sherdog.com


Raphael Butler has spent most of his life learning and trying to perfect the Sweet Science. The longtime professional boxer made the jump from the ring to the cage a few years ago, and he has flourished -- so much so that the fistic veteran has made it all the way into the Bellator MMA rank. He hopes to keep it that way.

Butler began boxing professionally in 2004 and knocked out 13 of his first 17 foes. Along the way, he toppled mostly regional opposition but he eventually began challenging much tougher opponents. Butler never captured a world title, but he stood toe-to-toe with many high-level boxers like Eddie Chambers, Malik Scott, Jason Gavern and Chris Arreola. After losing his last four bouts, he opted to go to MMA and start anew.

Butler has found early success thus far in his second career, having lost only once astride nine wins, all by stoppage. But he isn’t just knocking out his foes; he’s submitting them, too. “The Silencer” actually owns two authentic submission wins thus far in his still-blossoming MMA career -- one via armbar and one in his last fight, which he won via first-round guillotine over Josh Diekmann.

But that doesn’t mean that Butler has suddenly transformed from Roberto Duran into Robert Drysdale. A striker at heart, Butler says he still has to remind himself that he can do more than just punch while in the throes of combat.

“It’s still kind of hard for me because my body is still used to doing things a certain way,” he admitted in a recent interview with Sherdog.com. “I started boxing at 15 so my body now just naturally moves in that way, like a boxer. The most difficulty I have is getting my body to not move that way.

“But I think the reason why my transition from boxing to MMA has been easier than other boxers in the past is that I actually respect the game, the martial arts,” he added. “I know I can’t rely on just my boxing to be a high-level fighter in this sport. I know I need to keep learning about this sport and I have to humble myself to MMA.”

As long as he stays humble to his new-ish career, he should continue to have success inside the cage. Butler’s next obstacle is younger lion Lorenzo Hood, a fellow Chicago native who has stopped every single man he’s beaten. While Hood may not be as experienced as Butler, he is a super athlete with a killer instinct trying to continue his rise through the heavyweight ranks.

“I see him as a young guy who has an opportunity to get his name out there,” Butler said of his Bellator 141 opponent. “I see him as being potentially very dangerous because this is the fight that can launch his career if he wins. I am way above those guys he has beaten up to this point, but that doesn’t mean much because he did what he had to do against those other guys. He’s still a dangerous fighter.”

Butler also doesn’t quite know what to expect from his opponent come Friday night. Of all the film he’s watched, the one thing that intrigues him the most is how Hood is completely unassuming when the fight starts, which makes him even more dangerous.

“He comes out very relaxed,” he mused. “I’m not sure if that’s his fighting style or if he’s just that comfortable out there, and that’s dangerous. I’m expecting him to do everything: starting out fast, slow... Any and everything is how I’m preparing for this fight.”

If Butler can continue his upward swing in MMA, he’ll remain the only legitimate professional boxer to have done some serious damage in MMA. The debate has always raged about which boxers would do well if they crossed over, but Butler’s name is virtually never mentioned. It’s because he never captured a world title and, even though he’s a heavyweight with talent, he has always been anonymous.

“I don’t care if people mention me or not and I actually prefer that people don’t mention me,” he admitted. “It’s hard enough to get fights as is because whenever people hear my name, a lot of them don’t want to sign a contract. I don’t like or even want my name brought up because it just makes the job that much harder for my promoter.”

In the end, Butler has a job to do and he has a stiff test against a young man trying to burst onto the scene in a major way. Butler has a game plan and he’s going to stick to it, as long as he doesn’t fall into the trap of forgetting there is more to this sport than just punching.

“I still have to remind myself that I can kick, that I can knee, that I can elbow,” he chuckled. “It doesn’t come naturally to me yet and sometimes I forget that I can do all that. I’m still not used to just grabbing somebody because I’m still learning the transition.”