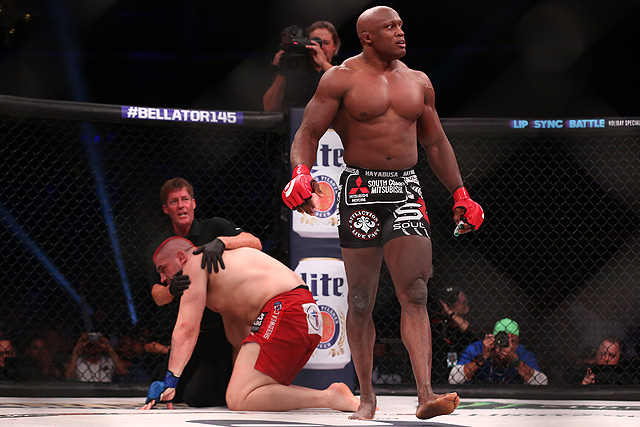 
Bellator 145 drew the California-based promotion’s third-highest ratings figure of 2015, attracting an average of 814,000 viewers to Spike TV on Nov. 6.

The organization’s third tent-pole event of the year peaked at 1.048 million viewers for the heavyweight showdown between Bobby Lashley and James Thompson, which was the second bout on the evening’s main card. Lashley, who is also a pro-wrestling star, stopped Thompson via technical knockout 54 seconds into the opening stanza of their fight. Thompson defeated Lashley by split decision in their first meeting at Super Fight League 3 in May 2012.

An industry source revealed the ratings figures to Sherdog.com on Tuesday. Bellator 145 took place at Scottrade Center in St. Louis and saw Daniel Straus capture the featherweight title with an entertaining five-round verdict over Patricio Freire in the main event. In the co-headliner, Will Brooks outpointed Marcin Held to retain his 155-pound strap.

Bellator 145’s ratings were exceeded this year only by two previous tent-pole offerings: Bellator 134, which drew a reported average of 872,000 viewers and Bellator 138, which attracted an audience of 1.58 million. Bellator 134 was headlined by a light heavyweight title tilt between Liam McGeary and Emanuel Newton, while Bellator 138 featured a mainstream-friendly clash between Kimbo Slice and Ken Shamrock.