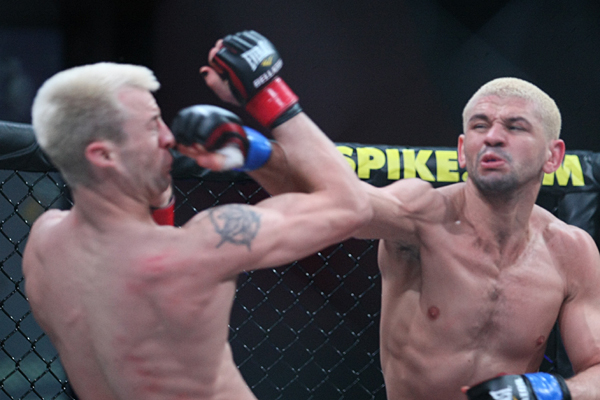 The promotion also affirmed that the May 11 event will take place at Caesars Hotel and Casino in Atlantic City, N.J., and will showcase the Season 6 featherweight final between Daniel Straus and Marlon Sandro.

Additionally, the main card will see Seth Petruzelli return to the Bellator cage to take on Carmelo Marrero in a 230-pound affair, and hard-hitting Dream welterweight champ Marius Zaromskis will take on Waachiim Spiritwolf in a rematch of their 2010 no-contest.

The evening’s undercard will feature a pair of lightweight contests, as Marcin Held faces Derrick Kennington and Jacob Kirwan faces Don Carlo-Clauss. Bantamweights Claudio Ledesma and Anthony Leone will collide, as will middleweights Gregory Milliard and Francois Ambang. Rounding out the preliminary proceedings will be a 175-pound catchweight bout pitting Jesus Martinez against Aung La Nsang and a featherweight tilt featuring Jeff Lentz and Eddie Fyvie.

Galvao advanced to the semifinal round by outpointing Ed West in the Bellator 65 quarterfinals, taking an active unanimous decision from the three-time tournament veteran. A former Shooto 132-pound title challenger, the Brazilian owns nine of his 10 career victories by decision.

Marx used superior size and control in his quarterfinal effort to outpoint Masakatsu Ueda at Bellator 64. “T-Train” has now won four consecutive bouts, finishing two of his foes in that span. A Jackson’s MMA representative, the 34-year-old owns 19 career victories to his credit and has never been knocked out.