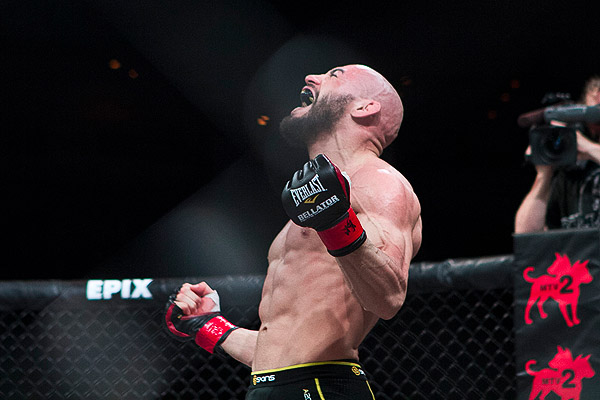 While the competitors are still unknown, the final round of Bellator Fighting Championships’ Season 6 lightweight tournament now has a confirmed date and venue.

Bellator 69 will host the 155-pound final on May 18, promotion officials confirmed Monday in a release. The semifinal matchups -- Rick Hawn versus Lloyd Woodard and Brent Weedman versus Thiago Michel Pereira Silva -- will take place April 20 in Cleveland at Bellator 66.

Bellator 69 will air live on MTV2 and Spike.com from L’Auberge Casino Resort in Lake Charles, La., and will also feature a 115-pound tilt between highly ranked women’s competitors Megumi Fujii and Jessica Aguilar. Other bouts confirmed for the card include a Season 7 tournament qualifier between hard-hitting heavyweights Ron Sparks and Kevin Asplund, and a lightweight affair pitting Louisiana native Josh Quayhagen against Cliff Wright.

Hawn and Woodard enter their semifinal with identical pro records of 12-1, though Woodard is eight years younger and has been fighting four years longer. The Montanan “Cupcake” reached the semis with a brutal kimura submission of former finalist Patricky Freire on March 23, while Hawn impressed in his lightweight debut on the same night by handing Ricardo Tirloni his first knockout loss.

Like Hawn, Weedman has dropped to 155 pounds after an unsuccessful run through Bellator’s Season 5 welterweight tournament. The karate stylist finished J.J. Ambrose in this season’s lightweight quarterfinals with a Von Flue (shoulder) choke on March 23. His opponent, Brazilian standout Pereira, edged countryman Rene Nazare in a split decision.

The winner of the tournament will earn $100,000 in total prize money and a shot at current titleholder Michael Chandler.

Updated at 6:57 p.m. ET: This item originally stated that the lightweight tournament semifinals will take place at Bellator 69; in fact, it will be the tournament final.