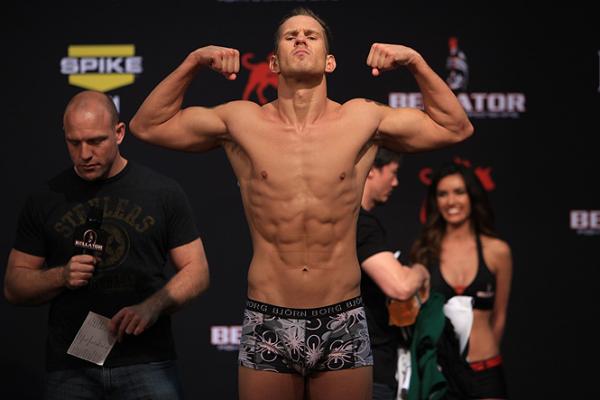 It took Maiquel Falcao a little longer to make weight than his opponent, but the Brazilian got the job done on his second trip to the scale.

Falcao checked in at 186 pounds after initially weighing 188, while fellow middleweight finalist Andreas Spang tipped the scales at 185.8 pounds on his first attempt at the Bellator 69 weigh-ins this afternoon.

The pair will collide in Friday’s main event, which takes place at L’Auberge du Lac Casino in Lake Charles, La., and airs on MTV2 and Epix. In addition to the Season 6 middleweight finals, the event will also showcase a welterweight semifinal pairing, as Karl Amoussou (170) takes on David Rickels (170.6).

Once-beaten Megumi Fujii (116) is also slated to compete on the main card, as “Mega Megu” locks horns with Jessica Aguilar (115.6). Heavyweights Ron Sparks (264.6) and Kevin Asplund (239) will round out the televised broadcast, as the big men battle for a slot in the Chicago-based promotion’s next tournament.

Though Falcao has earned 23 of his 30 career victories by way of knockout, “Big Rig” has yet to deliver a finish inside the Bellator cage. The hard-punching Brazilian earned a pair of unanimous decisions to qualify for the Season 6 final, outpointing Norman Paraisy in March before having his hand raised over Vyacheslav Vasilevsky last month. Falcao has won 12 of his last 13 bouts and has seen the judges’ scorecards just four times in his eight years as a pro.

Known as the “Sweet Swede,” Spang stepped in on short notice to replace an injured Bruno Santos in the Season 6 middleweight draw. The 33-year-old hit the ground running, squaring off with the heavy-handed Brian Rogers at Bellator 66. Though “The Predator” controlled much of the contest in the early going, Spang finally found his range in the third frame, buckling Rogers with a counter left hook that earned him his spot opposite Falcao.

*Quayhagen could not cut any more weight and will forfeit 20 percent of his purse. The bout is now a 158-pound catchweight contest.