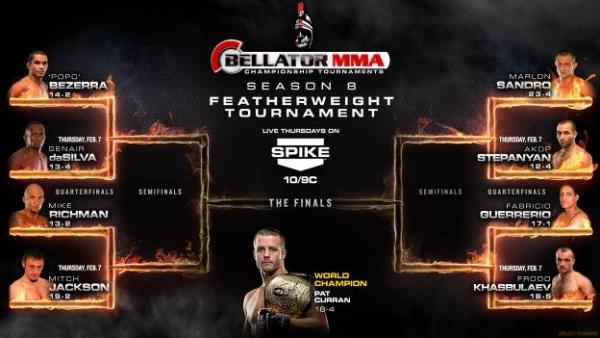 Bellator also confirmed that a previously reported middleweight title showdown between Alexander Shlemenko and Maiquel Jose Falcao Goncalves will go down at the event, which takes place at The Arena at Gwinnett Center in Duluth, Ga.. The evening’s main draw airs live on Spike TV at 10 p.m. ET, while the preliminary card streams on Spike.com beginning at 8 p.m. ET.

“There is nothing in this world I want more than the Bellator featherweight title, and this is my road,” Sandro said in a release. “I love Bellator with all my heart and I know my opportunity is now.”

Anchored at the renowned Nova Uniao camp in Brazil, Sandro has compiled a 6-2 mark in eight appearances under the Bellator banner, most recently choking out Dustin Neace at Bellator 81 in November. Stepanyan suffered his first loss since 2009 in his promotional debut, as the Rusfighters Sport Club tapped to an armbar from Wagnney Fabiano at Bellator 76.

Richman began his Bellator tenure with a bang in 2012, scoring first round-knockouts of Chris Horodecki and Jeremy Spoon before falling to Shahbulat Shamhalaev in the Season 7 featherweight tourney semifinals. Jackson enters his Bellator debut riding a seven-fight winning streak, with all of those triumphs coming by way of submission.

Bezerra is 6-1 with the promotion, with his only defeat coming at the hands of Sandro via split decision at Bellator 64. All but one of “Popo’s” 14 career victories have come by knockout or submission. Meanwhile, da Silva has won his last three fights, including Bellator triumphs over Bryan Goldsby and Bobby Reardanz.

Better known as Fabricio Guerreiro, Costa da Silva has won 17 of his 18 professional bouts heading into his Bellator debut, with 12 of those wins coming via tapout. Khasbulaev competed twice for the Chicago-based promotion in 2012, defeating Nayeb Hezam at Bellator 76 and Josh Pulsifer at Bellator 79.