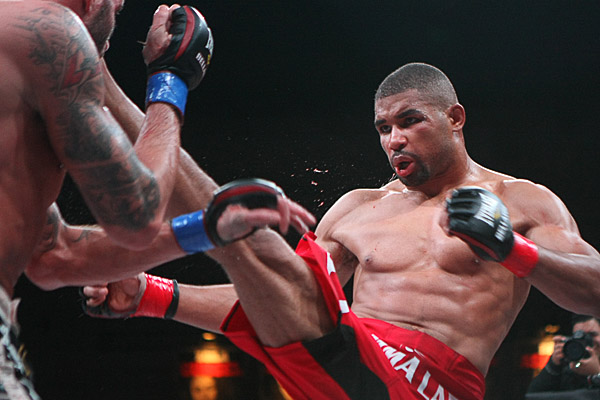 Bellator welterweight semifinalist Brent Weedman has been forced to withdraw from the Season 8 tournament due to injury and will be replaced by Bryan Baker at Bellator 90.

Bellator officials recently announced the news, revealing that Baker will square off with Douglas Lima at the Feb. 21 event, which takes place at Maverik Center in Salt Lake City.

Ben Saunders will lock horns with Raul Amaya in the evening’s other semifinal, while Rad Martinez will meet Shabulat Shamhalaev in the main event to decide the Season 7 featherweight tournament winner. The show’s main card airs live on Spike TV and will also see Muhammed Lawal face Emanuel Newton in a light heavyweight semifinal.

Baker, 27, previously competed as a middleweight, coming up short in two tournaments before making the cut to 170 pounds and entering the Season 6 welterweight draw. After outpointing Carlos Alexandre Pereira and Ben Saunders, “The Beast” ran into explosive Frenchman Karl Amoussou in the finals, succumbing to a slick first-round heel hook.

Lima, 25, has won 11 of his last 12 fights, capturing the Season 5 tournament crown by besting Steve Carl, Chris Lozano and Saunders. Though “The Phenom” would stumble in his title shot against Ben Askren, the American Top Team Atlanta rep rebounded with a pair of victories, knocking out an overmatched Jacob Ortiz this past November before stopping Michail Tsarev with leg kicks last month in the Season 8 quarterfinals.

Saunders, meanwhile, advanced to the Season 8 semis by taking a unanimous decision from Koffi Adzitso in the round of eight. “Killa B” previously faced Amaya in the Season 6 quarters, taking a unanimous decision over “Smash Mode” before dropping a decision to Baker in the semis. A seven-time UFC veteran, “Killa B” has stopped 12 of his 15 victims and has yet to be submitted in nearly nine years as a pro.

Amaya has competed twice since falling to Saunders in Season 6, taking out Kenny Moss this past July and then returning to the cage on Jan. 24 to finish Jose de Ribamar Machado Gomes in the opening round of Season 8. The exciting conclusion to that three-minute slugfest resulted in the fifth career knockout victory for Amaya, who also owns six wins via submission.