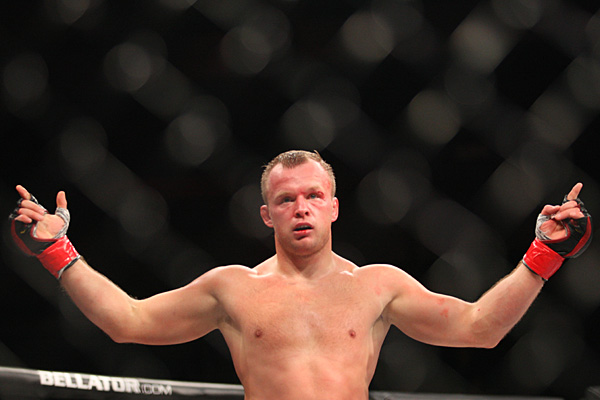 Alexander Shlemenko is known as one of Bellator MMA’s most prolific finishers, a reputation he hopes to uphold on Saturday night when he puts his middleweight title on the line against Brett Cooper in the main event of Bellator 98 at Mohegan Sun Arena in Uncasville, Conn.

The Spike TV-broadcast main event marks the second time Shlemenko and Cooper will share the cage, as “Storm” defeated the American in a hard-fought unanimous decision back in 2011. This time, however, Shlemenko does not foresee the bout going the distance.

“I think I became better in all aspects of my MMA game since then,” Shlemenko recently told Sherdog.com. “In this rematch, I’ll do everything to finish the fight, so it won’t go to judges this time.”

Shlemenko was originally supposed to do battle with former World Extreme Cagefighting champ Doug Marshall, who knocked out Cooper in Bellator’s Season 8 tournament final, but Marshall was forced to withdraw from his title shot with a broken hand. Bellator officials then instituted a new policy in which both the front office and the champions voted on a replacement for Marshall, eventually selecting Cooper.

Upon hearing the news, Shlemenko was concerned that his fight might be indefinitely postponed, a position he sat in for more than a year after winning the Season 5 tournament and earning a shot at then-Bellator champion and future UFC talent Hector Lombard.

“At first I was very upset and disappointed, because I thought that my fight would be postponed again,” said Shlemenko. “But then I learned that the fight would still take place, just with a different opponent, which was good. And I will have a chance to meet with Doug later, so it is not a problem for me.”

Though Shlemenko would never receive his rematch with Lombard due to “Lightning” signing with the UFC, the hard-hitting Russian nevertheless got his second crack at the Bellator title when he took on Maiquel Falcao for the vacant strap this past February. Shlemenko put forth a dominant performance against the Brazilian at Bellator 88, devastating Falcao with body shots before slamming the door in round two.

“I think that it was the most important victory for me, because I won the belt,” said Shlemenko. “I'm pleased with the way I fought. [I suffered] no injuries, not even bruises, and I did everything I planned to do. [It was a] clean victory.”

Though Cooper enters his unexpected title opportunity on the heels of his vicious knockout loss to “The Rhino,” Shlemenko does not expect his new challenger to step into the cage gunshy for their rematch.

“I think that Cooper will still be coming forward and bang, just like he does in all of his fights,” said Shlemenko. “I don't think that his previous loss would give me any advantages.”