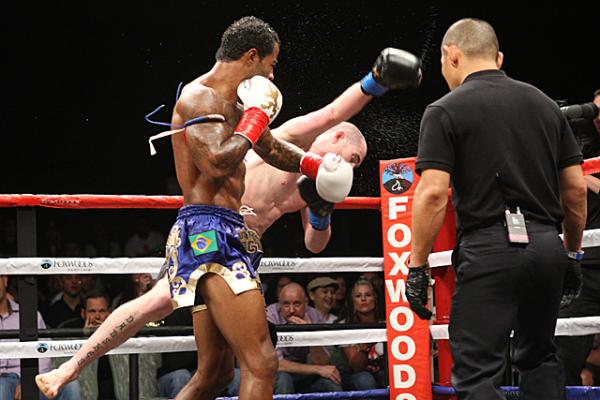 
Cosmo Alexandre cruised to a unanimous decision victory over Mark Holst in the main event of Lion Fight 15, using a decided speed advantage to gain the favor of all three ringside judges at Foxwoods Resort Casino in Ledyard, Conn.

Holst simply could not penetrate Alexandre’s defense for the vast majority of the AXS TV-broadcast headliner, as the Bellator MMA vet did an excellent job of covering up throughout the bout. The former world champion threatened Holst with a hard right hand in the first round -- a weapon he would use continually throughout the contest, though Alexandre could never quite find his mark and land the technique solidly.

Alexandre continued to move forward throughout the second and third frames and then upped his aggressiveness in the fourth, rifling off right crosses and elbows to move the UFC veteran backward. Though Holst picked up his workrate in the final period and managed to score with some straight punch combinations, the effort proved insufficient to sway the judges in his favor.

In the evening’s co-main event, Kevin Ross stopped a game Chris Mauceri in the third round of their 142-pound showdown. Ross took charge of the contest from jump street and did not let up, opening a deep gash on Mauceri’s forehead early in the first frame with a slicing upward elbow. By the second stanza, both men were stained red with Mauceri’s blood, though the 23-year-old remained aggressive in spite of Ross’ unrelenting, technical offense. Just 21 seconds into the third period, referee Dan Miragliotta called for time and then stopped the contest on the advice of the ringside doctor, awarding “The Soul Assassin” the technical knockout victory. 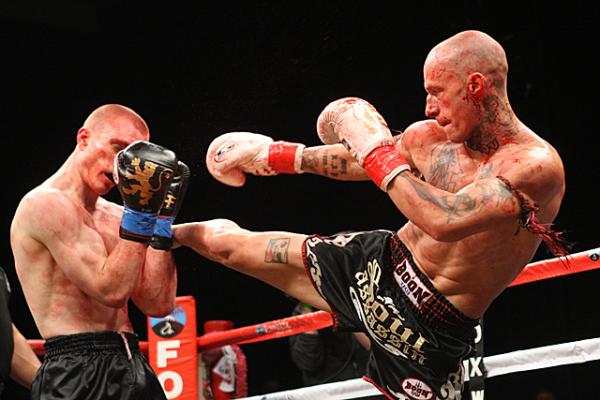 Photo: K. Mills/Sherdog.com
Ross bloodied and battered Mauceri.
Lucy Payne lasted much longer in her rematch with Tiffany Van Soest, but their second meeting nevertheless amounted to one-way traffic in favor of the American. Van Soest, who knocked Payne out in the first round last July, used a fast, varied attack to stay one step ahead of the lanky Brit over the course of 15 minutes. Though van Soest appeared to get the better of her foe in each frame, she was nonetheless declared the winner by a curious split decision, with one ringside judge scoring the five-round contest an indefensible 50-45 in favor of Payne.

Mohammed Lemjerdine evened the score with Jason Andrada in the evening’s second rematch, outpointing “Ridiculous” in a unanimous decision. Though Andrada put the Moroccan to sleep last November in their first encounter, he would be the one picking himself up off the canvas twice in the opening period of their return bout. Andrada battled back competitively through the middle frames, but the offense was not enough to woo the ringside judges, all three of whom scored the bout for Lemjerdine.

Earlier, Pedro Gonzalez finished Nick Chasteen to pick up the first win of his pro muay Thai career, opening a large cut on Chasteen’s forehead that forced the ringside physician to halt the contest late in round two. In the evening’s first televised contest, Tim Amorim scored a second-round stoppage over fellow pro debutant Tom Evans when Evans was not allowed to answer the bell for round three.