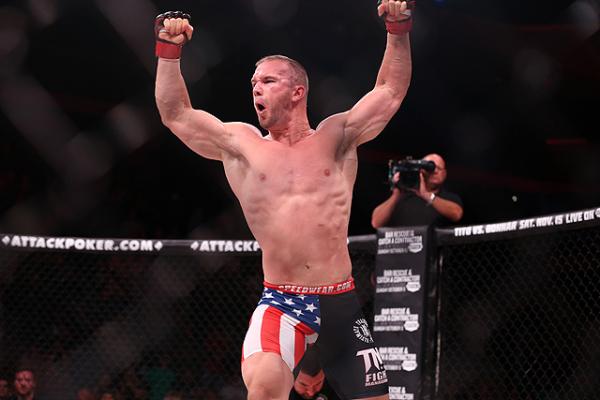 
Brandon Halsey wants to fight the best Bellator MMA has to offer; if that means moving up a division, then so be it.

The reigning middleweight champion is scheduled to make his first title defense against UFC veteran Kendall Grove at Bellator 137 on May 15, but in the big picture, he doesn’t see a lot of challenges at 185 pounds.

After watching Halsey dispatch 61-fight veteran Alexander Shlemenko in a tidy 35 seconds to claim the middleweight crown this past September, it’s hard to fault the former NCAA All-America wrestler for dreaming big. Or at least bigger. The muscular HB Ultimate product has already been contemplating a move to 205 pounds and is confident he can succeed there.

“Obviously I’m a big middleweight. I’ve talked about it with my coaches, my trainers. Jumping up to light heavyweight is always in my mind,” he said. “I’m a big guy; I can fight at both weights. I feel like I have the [same] strength and size at 205 as I do at middleweight. Going up to 205 is definitely an option.”

In light of recent news, such a move might be even more appealing: Bellator signed fellow former NCAA All-American Phil Davis to a multi-fight deal earlier this month. As one of the top-ranked light heavyweights in the world, “Mr. Wonderful” would seem to be exactly the type of foe Halsey has been seeking.

If he can get by Grove, perhaps the man known as “Bull” might find an eventual showdown with Davis more intriguing than the remaining middleweight options. If Bellator were green light such a bout, Halsey would be all in.

“If Bellator wants me to fight Phil Davis, that’s what I’d do.”