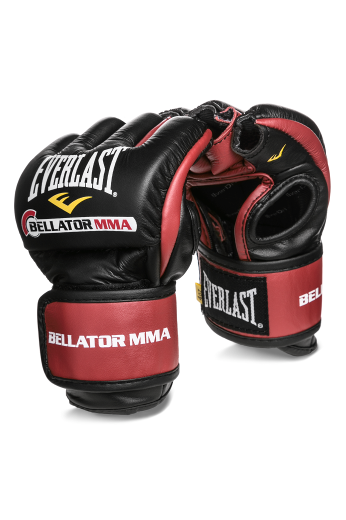 
Bellator MMA will debut a new fight glove design this Friday when the promotion’s 10th season kicks off with Bellator 110 from the Mohegan Sun Arena in Uncasville, Conn.

The Everlast-designed “PowerLock” gloves look similar to standard, fingerless MMA gloves but were constructed to promote “proper hand form and technique” and, according to Bellator’s official announcement, minimize the risk of hand injuries.

The new glove features a curved striking surface, as well as redesigned foam and extra padding designed to protect a fighter’s pinky and thumb knuckles, also known as the first and fifth metacarpals.

“Fighter safety is absolutely paramount in every decision we make, and when our team sat down with Everlast, both of our companies shared one goal: take the next step in advancing the protection for every athlete that steps into our cage,” said Bellator CEO Bjorn Rebney in the release. “We’ve already had countless fighters test this new glove in full sparring, and the reviews have been off the charts. Working in partnership with Everlast, we have created a glove that not only improves fighter comfort but also lowers the risk of injury from both an offensive and defensive perspective.”

Bellator 110 airs live on Spike TV this Friday and will feature the opening rounds of the organization’s next light heavyweight and featherweight tournaments. Former UFC 205-pound champion Quinton Jackson will top the bill, as “Rampage” takes on onetime Bellator king Christian M’Pumbu.