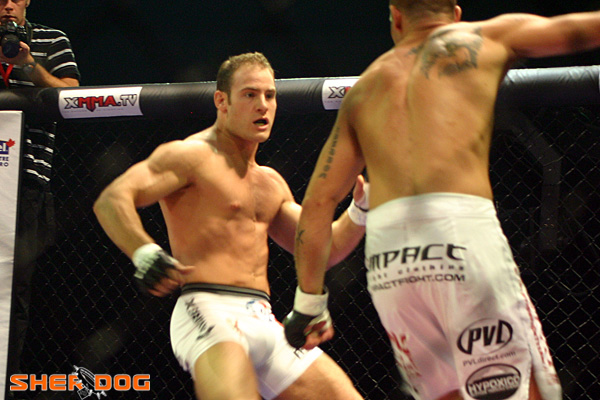 The Chicago-based promotion recently announced both signings. It is unknown at this point when either fighter will make his promotional debut.

Silva fought eight times in 2011, emerging victorious in all but one of his outings. Following a submission defeat to Diego D’Avila in February of last year, “Morcego” has posted nine straight wins, three of which have come in 2012. Representing Renovacao Fight Team, the luta livre practitioner joins Bellator’s ranks alongside teammates Maiquel Jose Falcao Goncalves, Genair da Silva and Luis Alberto Nogueira. Silva last competed on May 19, knocking out Mauricio da Silva with a head kick in just seven seconds.

“Signing with Bellator is by far the best thing that ever happened to me,” Silva said in the official release. “It’s a chance of showing the world what I can do inside the cage. My manager always tells me how great of an atmosphere Bellator has, and I can’t wait to be part of it. My goal is be the Bellator bantamweight champion and to serve as an example for all the poor children in the world so they can realize that they can have a great future in MMA.”

DeLorenzi has not competed since suffering a serious injury in 2010 that sidelined him for the better part of two years. The Canadian returns to the cage riding a four-fight winning streak, dispatching Dale Hartt at Ringside MMA 7 in his most recent bout to date. DeLorenzi’s lone career defeat came at the hands of a href="/organizations/Ultimate-Fighting-Championship-2">UFC vet War Machine in 2009, submitting to a rear-naked choke at XMMA 7. The 27-year-old owns eight of his nine victories by knockout and has seen the judges’ scorecards just once since beginning his pro career in 2008.

“All I’m thinking about is collecting some victories and getting into the next lightweight tournament,” said DeLorenzi. “It’s a huge honor to be fighting with Bellator, and I want that belt. I’ve been away from the MMA world for so long, it’s going to be great to get back into the cage and show the world what I’m capable of.”