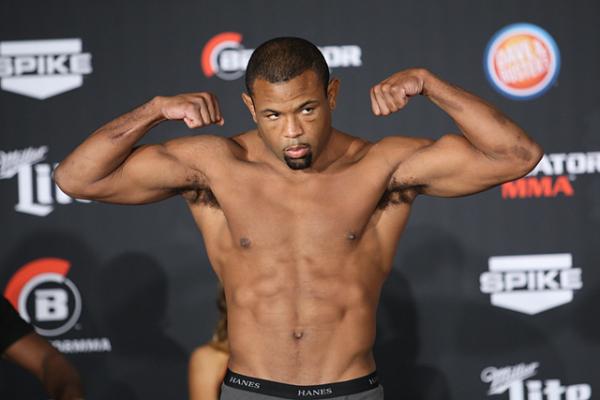 
The current Bellator MMA light heavyweight champion at 30 years old, Emanuel Newton is in the golden age of his mixed martial arts career. But a successful title defense against Joey Beltran at Bellator 124 brings him one step closer to the inevitable: retirement at age 33.

“When it comes down to it that’s what I want: I want the tough fights; I want to be challenged,” Newton told Sherdog.com. “I want to be done fighting when I’m 33. I don’t want to fight past 33. Now is the time. I want to put the time in; I’ve got to get the tough fights so when I retire I can say, ‘Hey, I fought and beat these tough guys.’ Then I can continue on with my legacy by passing it on to my fighters.”

When pressed as to why he would be so steadfast about retiring a mere three years from now, Newton looks at the choice as one that will lead him into the next phase of his life and career.

“I’m done at 33, that’s just what I feel. I’ve been fighting for a long time and I want to be able to stay in the gym when I’m older,” Newton said. “I see a lot of these guys like Tito [Ortiz] walking around like old men, and I think to myself, I don’t want to look like that. It also gives me a goal of trying to stay undefeated till I’m 33.”

Fighting professionally since 2003, “The Hardcore Kid” already has 31 fights under his belt. The 32nd comes Friday against Beltran, a former Ultimate Fighting Championship competitor who is known for his brawling nature. Beltran’s recent track record -- just one win in his last five fights -- leads many MMA fans to question why he deserves a spot in a 205-pound title fight.

“I’ve just got to thank Joey Beltran for stepping up. I needed a fight, I’ve got to fight; I have a family to take care of, so they [Bellator] said, ‘We will see what we can do,’ but nobody wanted to step up. Joey Beltran did,” Newton explained. “He’s tough. He’s going to keep coming forward; he’s got a chin on him; he doesn’t have any quit in him; he’s definitely not a pushover, but this is my belt, my time and he’s not going to take it from me. I’m going to go in there and have a spectacular performance against him and finish him.”

To get to this point, Newton has learned a lot about himself in regards to how to properly condition himself for a sport as demanding as MMA. Newton’s training camp focuses less on beating himself up every day in the gym and more so on technique. He credits Reign MMA/Kings MMA for working with him diligently on these aspects of his game.

“Training camps been good. I’ve really learned that having the hard sparring sessions isn’t necessarily the best. I listen to my body. I’ve gotten better at this after fighting for 11 years. It’s a lot easier for me to not get injured and feel fresh and go into the fights ready to roll,” Newton said. “I weigh like 208 pounds today, then only cut like three pounds over two days. I think we are programmed to destroy ourselves in the gym and then eat three times a day, but it doesn’t have to be that way.”

With two wins already under his belt against Muhammed Lawal, Newton says that it has been nice moving away from the topic of “King Mo,” but he knows if the former Strikeforce standout continues winning and Newton remains champion, a third fight will be inevitable.

“I feel like I’ve put it behind me, but everyone keeps bringing it up. But I totally understand: He’s the most notable win I have on my record,” Newton said “It definitely feels good to put Mo behind me, although he’s probably going to pop up again in the future. It felt good to knock him out the first time and then beat him the second time. But we will see what happens in the future.”

If all goes as planned for Newton, a win Friday will send him into 2015 with the title securely around his waist. With only two fights in 2014, Newton hopes to get plenty of action in as champion next year.

“I’d like to fight four time in 2015, maybe five. We will see what the universe permits me to do. I’d like to fight whoever. I’m sure more guys will come out of the woodwork. I’m not too big on looking at the future,” Newton said. “It’s my title, it’s my belt. I have a different mindset when I step in there. I’m going to do everything within the rules to rip my opponents face or make them bleed and make them hurt. I have the mindset if you want this belt, you have to kill me.”

Surely that is exactly what Beltran will be trying to do in the main event on Friday. If you listen to Newton, the reigning champion will tell you that a while loss isn’t in the cards, a stoppage of the “Mexicutioner” surely is.

“I’ll win by finish: either KO, TKO or submission,” he said.