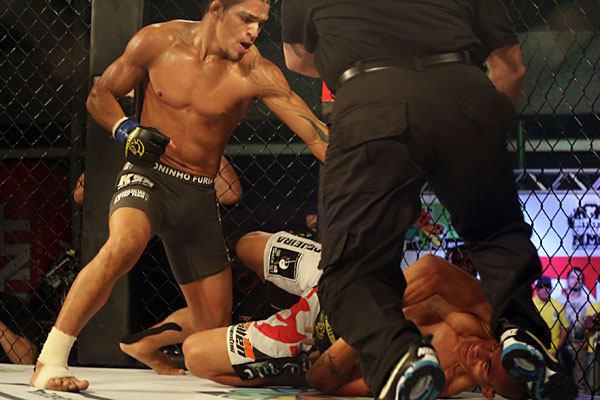 Gleristone Santos made his stateside debut in 2014. | Photo: Alan Oliveira/Sherdog.com


Gleristone Santos has signed an exclusive, multi-fight deal to compete for Bellator MMA.

The promotion announced the signing of the highly-touted Brazilian prospect on Tuesday. A debut date and opponent for Santos, who fights at featherweight, are expected to be revealed in the near future.

Nicknamed “Toninho Furia,” the 26-year-old Santos has compiled a 27-4 mark since making his professional debut as a teenager in 2005. The Brazilian Top Team member has finished 15 of his triumphs by way of knockout, technical knockout or submission.

Most recently, Santos competed twice for Titan Fighting Championship in 2014, scoring a second-round technical knockout against Alvin Robinson at Titan FC 28 before earn a split-decision triumph over Robert Washington this past September.

Santos notably competed against current Bellator featherweight king Patricio Freire at a Brazilian event in 2009, losing via flying knee knockout at 2:16 of the first frame.