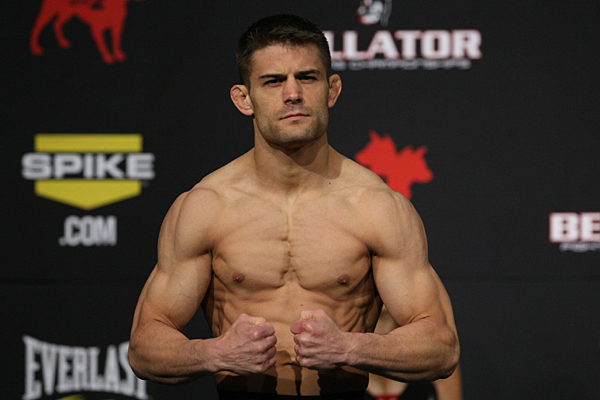 Bellator CEO Bjorn Rebney revealed Tuesday that the scheduled Bellator 84 bout between Rad Martinez and Shahbulat Shamhalaev will now take place at some point in Season 8. The fight was initially slated to go down this past Friday at Bellator 83, but Shahbulat was forced to withdraw at the last minute after experiencing symptoms consistent with food poisoning.

The fight was rescheduled for this Friday, but Rebney today said that he had spoken too soon by making that announcement, as Martinez, who takes care of his paraplegic father full-time, will be unable to compete on that date due to his family responsibilities.

Martinez, 25, currently rides a five-fight winning streak, punching his ticket to the Season 7 final by outpointed a pair of game competitors in Nazareno Malegarie and former IFL champion Wagnney Fabiano. Known for his athleticism and wrestling ability, Martinez achieved national prominence last year when he was featured during an episode of ESPN’s popular “Outside the Lines” program.

Shamhalaev, 29, has not lost since 2009, rattling off a record of 9-1 in his last 10 fights. The Russian made his Bellator debut in the Season 7 quarterfinals on Oct. 12, when he finished Cody Bollinger with brutal ground-and-pound at Bellator 76. “Sha” was also victorious in his Nov. 2 semifinal appearance against Mike Richman, catching the American with a beautiful counterpunch that put him on the mat and secured Shamhalaev’s place in the tournament finals.