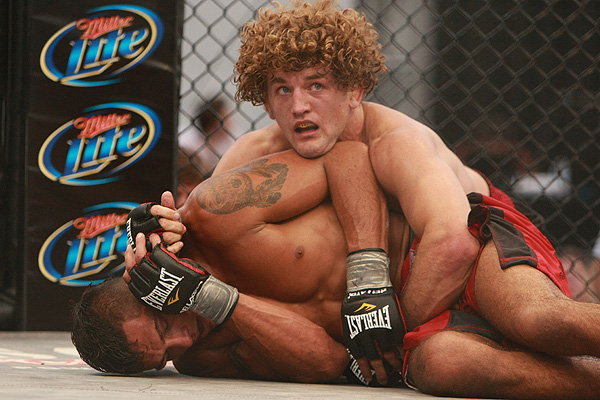 A winner of nine straight, Lima earned the shot by storming through the promotion’s season five welterweight tournament. He outpointed Steve Carl in the opening round and then knocked out Chris Lozano in the semifinals and Ben Saunders in the finals.

The win over Saunders, a UFC veteran, was particularly impressive. In fact, Askren recently told the Sherdog Radio Network’s “Savage Dog Show” that he thinks Lima will be as tough as anyone he’s ever fought.

In the SDS interview, the champion also discussed his strategy, his progression in MMA and more.

Askren on Lima being a legit contender: “I think that’s a good thing that people think he can contend for my title. That way, once I beat him up, it will look better for me.”

On whether he’ll stick to wrestling Lima, seeing how dangerous he is on the feet: “I really think dangerous or not dangerous, the best thing I can do is put somebody on his back and beat him up. The thing I’ve been getting better at is actually beating people up. I’ve obviously been good at taking people down in MMA, but it’s taken me quite a while until I was able to start really doing a lot of damage with my punches. I think I’ve got to that point in my career, and so I will be able to take him down and I will be able to do a lot of damage once I’m on top of him.”

On the advantages he has over Lima besides wrestling: “Number two, cardio. I’ve seen him in fights. I don’t think he pushed the pace. I’ve also heard that his training is kind of lazy. Toughness and cardio’s something you can’t teach. You’ve got to have that inside you, and that’s something I’ve got. I think I can really push the pace on him. Number three, my striking is vastly underrated. I think it’s got so much better from my last fight. I think he’s going to be very surprised by that. Number four, we’re both brown belts in jiu-jitsu, but I would venture to guess once I get on top, I’ll be able to stay there and do a lot of damage. I think there’s a lot of reasons I have an advantage.”

On the confidence he’s gained from years of wrestling: “A lot of it’s about that battle. I’ve been in battles since I was 14 years old in the wrestling room. … We’re more battle-tested than maybe somebody who started MMA with no background. I’ve been in the fire. I know what it’s like. I know I’m ready to scrap.”

On his progression so far: “I’m totally happy with it. The only thing I could desire more is some more finishes in my earlier fights. Besides that, obviously I’m undefeated. I’ve got a Bellator title. I’m only nine fights into my career. I’ve been fighting for right around three years, so I can’t really ask for more than what I’ve got so far.”

On finishing fights: “If you look at my wrestling credentials in college, I was one of the more dominant wrestlers in a long time. I have the fourth most pins ever in college wrestling. I have the NCAA record for most consecutive first-period pins, so I was totally a finisher in wrestling. It’s just taken me a while to learn how to do it in fighting.”