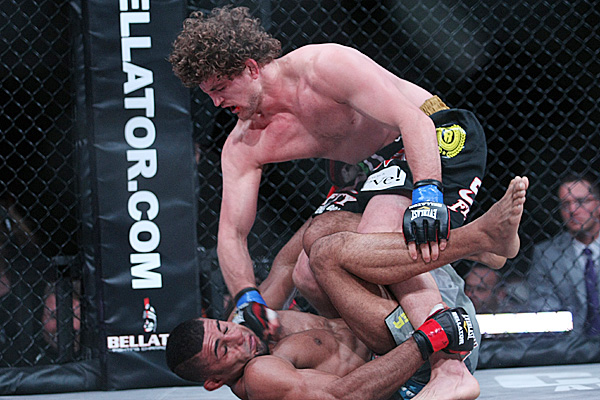 Ben Askren did what Ben Askren does, and Douglas Lima was helpless against it.

Askren (10-0, 7-0 BFC) utilized takedowns, his uncanny scrambling ability and a suffocating top game, as he retained his Bellator Fighting Championships welterweight crown with a one-sided unanimous decision over the Brazilian in the Bellator 64 main event on Friday at Caesars in Windsor, Ontario, Canada.

Booed lustily by fans who desired more action on the feet, Askren swept the scorecards by identical 50-45 counts.

“If you don’t like the groundwork, there’s a sport they call boxing ... it’s not as fun, though,” he said. “I suggest you keep on coming here and watching my ass whoopins.”

Outside of a few right hands, sporadic punches from the bottom, occasional submission attempts and a slick first-round sweep, Lima (21-5, 3-1 BFC) did little of note from an offensive standpoint. At the end of two rounds, he looked lost and discouraged, his considerable repertoire utterly neutralized by an Olympic-caliber wrestler.

Askren struck for takedowns in all five rounds, tagged the American Top Team Atlanta representative with punches, hammerfists and elbows from inside his guard and scrambled away from danger whenever it surfaced. The 27-year-old Roufusport product tried to finish Lima with a third-round brabo choke but released the hold when it became clear it would not be successful, settling back into his routine and cruising to another decision. 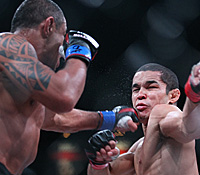 Sandro banked two rounds on two scorecards, as he landed his punches at a higher rate and kept Bezerra (13-2, 5-1 BFC) off balance with kicks to the outside and inside of his lead leg.

In the third round, “Popo” found another gear and zeroed in on his opponent’s head. He struck for a takedown, briefly took Sandro’s back and floored him with a right hand with roughly three minutes remaining in the fight. The finish he needed, however, never materialized, and Sandro walked away the victor. 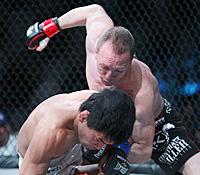 Marx stuck the former Shooto champion with straight lefts and worked his way into advantageous positions on the ground. Ueda (15-2-2, 0-1 BFC) was limited to second- and third-round takedowns, crisp body kicks and the occasional submission attempt. However, he could not overcome a visible size and strength advantage against the three-time Utah state high school wrestling champion, though he did raise a nasty swelling beneath
Marx’s left eye.

“The opportunity to fight a guy like Masakatsu was enormous for me,” Marx said. “I never perceived myself as the underdog -- from day one.” 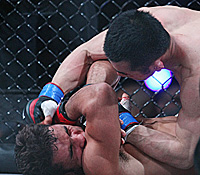 Nakamura scored with takedowns in all three rounds, as he repeatedly coaxed the aggressive Brazilian into his clinch. Lima (10-1, 0-1 BFC) was plenty active from his back, trying for everything from omaplatas, triangle chokes and armbars to heel hooks, foot locks and kneebars. None were successful, however, and his activity did not do enough to sway the judges to his side.

Having benefitted from a one-point deduction for low blows in the second round, Nakamura did his best work in the third despite suffering a cut near his left eye. The Japanese standout racked up points from top position and answered many of Lima’s submission attempts with some of his own. 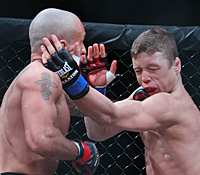 Richman wobbled the Canadian twice before an uppercut sent him backpedaling into the cage. From there, Richman (12-1, 1-0 BFC) unloaded with a series of uppercuts that brought the bout to an abrupt and violent conclusion. The 26-year-old Minnesotan has rattled off three straight wins. 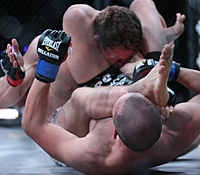 K. Mills
Laprise tapped out Taveirne.
Chad Laprise kept his perfect professional record intact, as he submitted Maximum Fighting Championship veteran Josh Taveirne with a first-round triangle choke in their undercard duel at 170 pounds. Taveirne (2-3, 0-1 BFC) asked out of the match 2:48 into round one.

Laprise (5-0, 1-0 BFC) succumbed to a pair of takedowns but lured the Canadian into his guard. He went first to the triangle, transitioned to an attempted triangle-armbar and returned to the original hold for the finish. Laprise has closed out all five of his opponents inside one round. 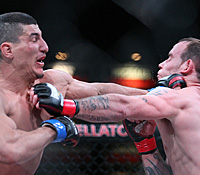 Secor (1-1, 0-1 BFC) was outclassed from the start, as Taleb grounded him repeatedly and attacked effectively while standing, from a distance and in tight quarters. The Ring of Combat veteran dominated so thoroughly that one judge, Mark Porliev, awarded him three 10-8 rounds. 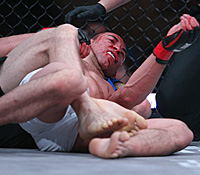 K. Mills
Fischer dominated Solomon.
Mash Fight Team representative Jason Fischer remained undefeated in his promotional debut, as he rendered Taylor Solomon unconscious with a third-round rear-naked choke in an undercard tilt at 155 pounds. Solomon (3-4, 1-1 BFC) went to sleep with one second left in the fight.

Fischer (3-0, 1-0 BFC) controlled all three rounds, as he scored with takedowns and delivered the more consequential strikes. In round three, he finally broke through the exhausted Solomon’s guard, transitioned to his back and cinched the choke. The Canadian refused to tap, electing to go the route of unconsciousness.

Lastly, in a 159-pound catchweight bout, Kyle Prepolec submitted Lance Snow with a first-round armbar at the 2:54 mark and Elias Theodorou scored a verbal submission win against Rich Lictawa after Lictawa suffered an eye injury at 0:33 of the third frame. Scheduled to be a middleweight bout, Lictawa missed weight by six pounds on Thursday.