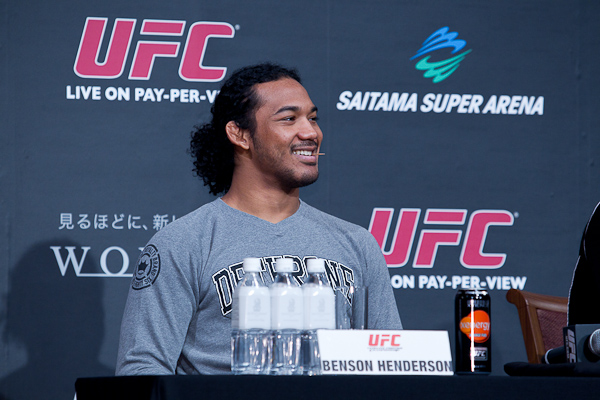 Benson Henderson completed his climb to the lightweight summit halfway across the world.

In a riveting five-round battle that showcased the best and most endearing qualities of both men, Henderson dethroned Frankie Edgar and captured the lightweight championship in the UFC 144 headliner on Saturday at the Saitama Super Arena in Saitama, Japan. All three cageside judges saw it in favor of Henderson (16-2, 4-0 UFC): 49-46, 48-47 and 49-46.

Based out of the MMA Lab in Glendale, Ariz., Henderson leaned heavily on powerful kicks to the legs and body of the champion. To his credit, Edgar pinned many of them between his arm and body, but they served their purpose nonetheless.

Late in the second round, Henderson permanently altered the complexion of the 25-minute fight, as he delivered a searing upkick from his back to Edgar’s exposed face. The New Jersey native crumpled where he stood and Henderson leaped into action, seeking his trademark guillotine choke. Edgar (14-2-1, 9-2-1 UFC) avoided further danger, but the damage was done and it was considerable.

“I have to thank [Donald] ‘Cowboy’ Cerrone for that,” Henderson said. “He landed that on me [at WEC 43], and I told him I was going to land it on somebody because that hurt -- bad.”

Rounds three, four and five unfolded into a beautiful tapestry of skill and will between two of the 155-pound division’s premier fighters. His left eye nearly swollen shut and his nose badly damaged by the upkick, Edgar never went away. However, Henderson landed more strikes of consequence -- according to FightMetric figures, he outlanded Edgar 87-68 in terms of total significant strikes and 100-81 in terms of total overall strikes -- and unleashed his guillotine once more in round four. Again, Edgar freed himself. Henderson was not surprised.

“He went the right direction, and he did the right technique to escape,” he said. “He knew what he was doing to get out of it. I was holding on to squeeze, thinking maybe he would go the wrong direction. I was hoping I had it, but props to him.”

Neither champion nor challenger held back in the fifth, as the indomitable Edgar cracked Henderson repeatedly with short, straight punches. Henderson provided his retort late in the frame with a jumping knee and followed Edgar to the ground in the closing seconds, working for a guillotine one last time. Alas, a finish was not in the cards.

Henderson, who has won 14 times in 15 bouts, saw his size and strength advantage as keys to the most significant victory of his career.

“I wanted to use my size to my advantage,” he said. “Making weight kind of sucks for me. I have to do like eight hard weeks and then two hard days of cutting down the weight. I pay a big price for that, and I want to make sure my opponents feel that pain when we have our 25 minutes inside the Octagon.”

“It tops [my win on ‘The Ultimate Fighter’ reality series],” Bader said. “Beating ‘Rampage’ in Japan is an amazing experience.”

For the most part, Bader kept himself out of harm’s way, content to allow Jackson (32-10, 7-4 UFC) to empty his gas tank with power punches that grew more and more desperate as the fight deepened. However, the former light heavyweight champion delivered one of his trademark Pride Fighting Championships-era slams in the second round, as he caught an ill-advised knee from Bader in the clinch, hoisted him skyward and dumped him awkwardly on his head and shoulder.

“It looked pretty bad, but he kind of took it out on my head a little bit,” Bader said. “I was rocked for a bit there, but my arm is fine.”

Bader recovered and returned to work, securing takedowns with more and more frequency. He brought the fading Jackson to the ground again in round three, shifted to side control before settling in half guard and dropping elbows and punches.

“We were actually going to come in here and not really go for takedowns at the beginning,” Bader said. “[I wanted to] throw the jab, move, use my range and not get into a boxing battle up close.”

Hunt (8-7, 3-1 UFC), who entered the UFC with a sub-.500 record in 2010, ran his improbable winning streak to three fights, as he buried the chiseled Frenchman with a series of right hands. The 37-year-old New Zealand native closed out the heavyweight showcase 2:11 into the first round, having floored the 6-foot-4 Kongo with his notoriously heavy hands.

A stout counter left hand from Hunt earlier in the round started Kongo’s downward spiral, and his work was done not long after. The defeat snapped a two-fight winning streak for Kongo (17-7-2, 10-5-1 UFC), who had not been stopped via strikes in nearly eight years. 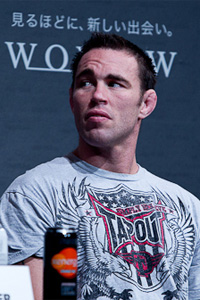 Jake Shields File Photo
Shields outhustled Akiyama.
Former Strikeforce champion Jake Shields spoiled the welterweight debut of Yoshihiro Akiyama, as his aggression and high-volume striking carried him to a unanimous nod from the judges. All three cageside judges scored it for Shields (27-6-1, 2-2 UFC) by identical 30-27 counts.

Akiyama (13-5, 1-4 UFC) landed the more profound strikes and scored with multiple trip takedowns and judo throws, but he never kept a high enough output with his punches and kicks to match the Cesar Gracie protégé.

Shields solidified his win, his first since a split decision over Martin Kampmann in his Octagon debut back in October 2010, with a strong third round. There, the 33-year-old Brazilian jiu-jitsu black belt finally moved the fight to the floor, this despite the fact that Akiyama resorted to grapping the fence in a desperate effort to avoid the takedown. Doggedly attached to Akiyama’s back, Shields fished for the rear-naked choke until the close of the fight.

“I wasn’t surprised [he was hard to take down],” Shields said. “No one has taken him down in the UFC, so I figured it would be a lot of work. I was expecting a war. I knew he was that good. He was coming off a couple of losses, but they were close fights. He’s a complete monster.”

For two rounds, Yushin Okami did everything right. Then came round three, where Tim Boetsch rendered all of it moot.

Boetsch (15-4, 6-3 UFC) rose from the proverbial dead to record a dramatic third-round technical knockout on the former UFC middleweight title contender, folding Okami with a series of vicious uppercuts from the clinch. The finish went down 54 seconds into round three, with Boetsch pumping his fists into his grounded foe.

Okami (26-7, 10-4 UFC) bashed Boetsch with straight punches throughout a one-sided first round, opening cuts beneath both of the American’s eyes. In round two, he brought Boetsch to the mat, threatened a kimura and eventually moved to mount, launching a violent assault with punches from top position.

Knowing he was down on the scorecards, Boetsch let loose in the third round. A glancing head kick sent Okami into retreat mode, and “The Barbarian” swarmed. Pinned against the cage by the powerful AMC Pankration representative, Okami found no refuge and wilted under the onslaught.

“I knew nothing less than a finish would win that fight for me,” said Boetsch, who has won seven of his last eight bouts. “Yushin was beating me up for two rounds, but my heart was in it. I knew I could take him out if I just stuck on it and did what I trained to do.

“I knew how tough Yushin is,” he added. “When I saw him hurt, I knew I had to jump all over him and couldn’t let him recover, and that’s exactly what I did. I landed a couple more big shots and put him away.”

Takedowns and a masterful top game carried onetime Sengoku and Shooto champion Hatsu Hioki to a lopsided unanimous decision over Bart Palaszewski in a featured featherweight matchup. All three judges scored it for Hioki (26-4-2, 2-0 UFC): 30-27, 29-28 and 29-28.

Hioki struck for takedowns in the first and third rounds, bringing his otherworldly ground game into play. Close to being finished by an armbar late in round one, Palaszewski (36-15, 1-1 UFC) dodged one bullet after another, as Hioki ran through a series of dynamic submission attempts, knifed through his guard repeatedly and tagged him with ground-and-pound from side control.

Though Palaszewski remained on his feet and enjoyed a productive second round, it was not nearly enough to even out the shellacking he absorbed whenever the two men were on the floor. Hioki will carry a six-fight winning streak into his next fight, perhaps a title bout with UFC featherweight champion Jose Aldo.

Former WEC lightweight champion Anthony Pettis needed less than 90 seconds to dismiss “The Ultimate Fighter” Season 5 semifinalist Joe Lauzon, as he scored a spectacular knockout with a beautiful left head kick 1:21 into the first round. Lauzon (21-7, 8-4) had never before been finished so quickly.

“I came out southpaw, and I saw him biting on the left hand,” Pettis said. “I set [the head kick] up perfectly.”

Pettis (15-2, 2-1 UFC) peppered his foe with combinations from the start, mainly with his hands. Then he unleashed the kick, shin struck head and Lauzon went down. Follow-up hammerfists polished off the defenseless East Bridgewater, Mass., native, as Pettis won for the sixth time in seven appearances and staked his claim as a contender at 155 pounds.

“I knew this is where I was supposed to be at,” said Pettis, a protégé of four-time world kickboxing champion Duke Roufus. “I’m in the UFC for a reason. I’m the best in the lightweight division, and I’m coming for that belt.”