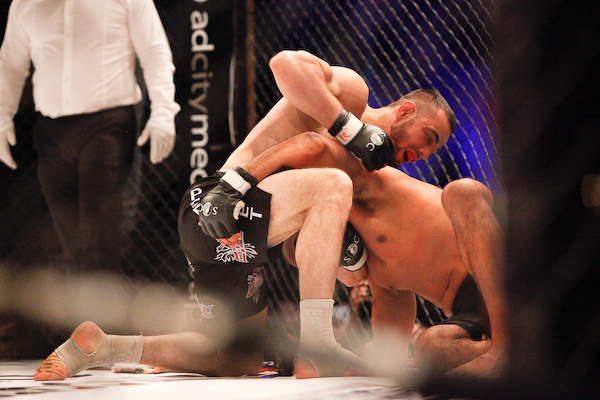 As the local favorite, Beslan Isaev faced plenty of pressure going into his headlining bout against Viktor Halmi at Cage Warriors Fighting Championship 58 in Grozny, Chechnya. He needed slightly more than three minutes to send those in attendance at the Olympisk Arena home happy.

The 29-year-old welterweight was clinical and composed in his pursuit of victory. Isaev (24-6 )had the Hungarian on the defensive from the outset, mixing punches to the head with hard knees to the body while controlling the center of the cage. The Peresvet FT product maintained that approach throughout the short-lived encounter, using his punches to set up the Thai clinch, where he continued to punish Halmi with repeated knees. Finally, Halmi (14-6) decided he had endured enough and elected to change levels as Isaev’s assault grew more intense.

Halmi’s takedown effort was immediately answered by a guillotine, however, and it was only a matter of seconds before Islaev secured the tapout, with the end officially coming 3:27 into the initial frame.

“Most important, I won,” Islaev said through a translator. “For us it’s a very big deal [having Cage Warriors in Chechnya]. I want to thank everyone who was involved with organizing this [event].”

The evening’s co-feature came to an abrupt end when Ion Cutelaba was disqualified for landing multiple blows to the back of Michal Andryszak’s head. After absorbing the series of illegal strikes, Andryszak wobbled to his feet, struggling to regain his bearings during a break in the action. As a result, referee Rich Mitchell called off the heavyweight conflict 4:07 into round one.

Andryszak (10-3, 1 NC) had a strong start, landing a takedown and attacking his 19-year-old foe with solid ground-and-pound. Cutelaba (4-1, 1 NC) was able to get to his feet, however, and eventually bullied the Pole to the mat from the clinch. A vicious elbow allowed Cutelaba to move to side control, but from there the Moldovan’s shots found the back of the head repeatedly, resulting in the untimely ending.

Earlier, James Brum gave Ruslan Abiltarov a rude welcome to CWFC, choking out the 21-year-old Ukranian prospect at the 3:05 mark of round one. It was the first the first stoppage in six Cage Warriors appearances for the Portsmouth, England, native.

Abiltarov (10-4) landed the first takedown of the bantamweight clash, but after that it was all Brum. Clearly the larger man, Brum (13-2) marched forward with punches before taking Albitarov’s back. The fighter known as “Job Done” then proceeded to do exactly that: After getting his hooks in, Brum softened his foe with short strikes to the head before transitioning to the body triangle, flattening his man out and securing the fight-ending rear-naked choke.

Superior aggression, power punches and top control carried Bakhtiyar Abbasov past experienced Brazilian Charles Andrade in a middleweight tussle. All three judges scored the contest 30-27 in favor of Abbasov (9-2), who had finished his previous four opponents inside of a round.

While Abbasov did the better job of pushing the action throughout, he was clearly wary of working in Andrade’s guard. Nonetheless, he gradually wore the Brazilian down by forcing him to defend takedowns, often having his most success securing top position after punching combinations or during scrambles. Andrade, who owns 17 of his 24 career triumphs by way of submission, loses his second straight fight to fall to 24-13.

For nearly two-and-half rounds, the lightweight clash between Ivan Buchinger and Jamal Magomedov was a closely-contested affair, the type that -- if it went the distance -- would remain in doubt until the judges’ scorecards were announced. Perhaps fighting with that in mind, Buchinger left nothing to chance, submitting his foe with a triangle armbar in the final frame.

Magomedov (5-2) appeared to land the most significant blows of the fight in rounds one and two, twice countering kicks with solid right rights before following his opponent to the canvas. However, Magomedov was also deducted a point in round one for repeatedly grabbing the fence. After eating a series of solid uppercuts in round three, Magomedov took Buchinger down, a choice that would come back to haunt him. Buchinger (23-4) first trapped his foe in a triangle, then, as Magomedov attempted to pull himself free, switched to the triangle armbar, eliciting a tapout 1:42 into the period.

It was business as usual for Pavel Kusch, as the Ukrainian earned submission victory No. 14 by forcing Chris Scott to tap out to a heel hook in round one of their middleweight encounter. The end came 2:59 into the period.

Kusch (14-4) made his intentions clear in the bout’s first 20 seconds, landing a takedown and immediately hunting for a leg lock. Scott (6-3) managed to escape the initial attack, landing a takedown of his own before taking Kusch’s back -- but the success was short lived. Kusch quickly reversed into top position and secured the heel hook, giving Scott no choice but to ask out of the fight.

In the first main card bout of the evening, Matt Inman notched his third consecutive win under the CWFC banner, stopping Bagautdin Sharaputdinov with elbows and punches from mount 2:31 into the second round.

Sharaputdinov (7-3) looked sharp in round one, landing a flurry of blows in close quarters as his British opponent attempted to initiate the clinch. Bloodied but unbowed, the SBG Manchester representative rallied in the second stanza, sprawling on a takedown attempt before eventually transitioning to full mount. From there, Inman (12-5) unloaded with unanswered punches and elbows until Mitchell was forced to call a halt to the welterweight contest.

In preliminary action: Liam James earned a unanimous decision over Akhad Mamedov at featherweight; Khusein Khaliev submitted Mihail Serdyuk with an arm-triangle 3:41 into round one at 170 pounds; Mohsen Bahari tapped Alexander Voitenko with a rear-naked choke at the 3:21 mark of round one at welterweight; Alex Enlund used a guillotine choke to defeat Sebastian Romanowski 3:44 into the opening frame of their 145-pound scrap; Zubair Tuhugov took a unanimous verdict over Denys Pidnebesnyi; and Aslambek Musaev scored a knockout against Zubair Kamamyan 3:41 into the first round at a 210-pound catch-weight.