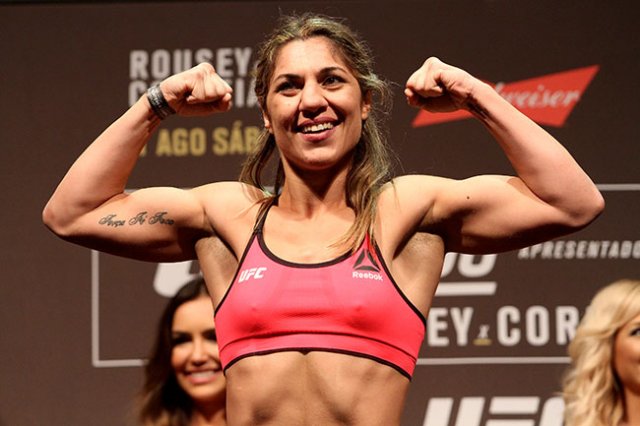 Bethe Correia was motivated by her loss to Ronda Rousey. | Gleidson Venga/Sherdog.com


Losing to Ronda Rousey has only strengthened Bethe Correia’s resolve.

The former bantamweight title challenger recently told Brazilian media outlet Combate that she plans on traveling to San Jose, Calif., to train at the American Kickboxing Academy. Correia normally calls the Pitbull Brothers camp, which is founded by Patricio and Patricky Freire, home but was invited to spend time at AKA by jiu-jitsu coach Leandro Viera.

“I've never done an exchange nor trained in another gym, other than the [Pitbull Brothers]. It was there that I made all my 10 camps, but [I] always had a strong desire to train in another gym, have new experiences and I had the great honor of being invited by Leandro Vieira, AKA jiu-jitsu coach, to spend a season training there,” Correia told Combate. “I had already heard a lot of AKA, because the team is very strong, with champion athletes and former UFC champions such as Daniel Cormier and Cain Velasquez, [in addition to] Leandro, who is known worldwide because of his jiu-jitsu. It is a very traditional academy, known for kickboxing too, so I will have the privilege of having my first coaching experience outside [my] team.” (translation via Google Translate)

According to the report, Correia made her decision to journey to AKA following her 34-second knockout loss to Rousey in the UFC 190 main event on Aug. 1. It was the first loss in 10 professional appearances for Correia. The Brazilian would like a Top 5 opponent for her next fight and has targeted potential matchups with Miesha Tate and Sarah Kaufman.

“I [have] unfinished business, for example, with Miesha Tate. Moreover, Sarah Kaufman is always challenging me,” she said. “I know they're both great challenges, and I really want to [have] as many fights as I need to be able to make my rematch against Ronda.”