Antonio “Bigfoot” Silva erased whatever was left of the Fedor Emelianenko mystique.

Silva forced a doctor stoppage against the revered Russian in the quarter-finals of the Strikeforce heavyweight grand prix at Strikeforce “Fedor vs. Silva” on Saturday at the Izod Center in East Rutherford, N.J. The end came between rounds two and three, Emelianenko’s right eye having been swollen shut by a series of hammerfists from the monstrous Brazilian.

“I trained hard for this fight with my camp,” Silva said. “All the people say, ‘Fedor, Fedor, Fedor.’ I trained too hard, and I showed it to the world now. I want the best heavyweights in the world.”

A competitive first round gave way to a lopsided second. Silva ducked one of Fedor’s trademark overhand rights and scored with a takedown inside the first five seconds. He passed to half guard and then to North-South position before moving to full mount. Hammerfists left Emelianenko’s face a mangled mess and forced the former Pride Fighting Championships heavyweight titleholder to surrender his back more than once. Silva worked first for a rear-naked choke and later an arm-triangle choke that nearly finished Emelianenko.

Exhausted by the worst beating of his storied career, Emelianenko saw his last-gasp effort come up short, as the two men traded leglock attempts at the close of the second round. The Russian returned to his corner, where it soon became clear he could no longer continue. Never before had Emelianenko been so thoroughly dominated.

Emelianenko, who had gone nearly a decade without a loss, has now been finished twice in the span of eight months. Afterward, he hinted at retirement.

“Something went wrong from the very beginning, and I couldn’t readjust myself. Maybe it’s time to leave,” he said. “Yes, maybe it’s the last time. Maybe it’s high time. Thank you for everything. I spent a great, beautiful, long sporting life. Maybe it’s God’s will.” 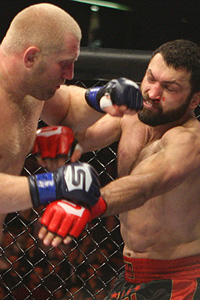 D. Mandel
Kharitonov (left) scored a brutal KO.
Pride Fighting Championships veteran Sergei Kharitonov dazzled in his promotional debut, as he knocked out Andrei Arlovski in the first round and advanced to the Strikeforce heavyweight grand prix semi-finals. Two standing-to-ground punches left Arlovski unconscious against the cage 2:47 into round one.

Arlovski used his speed and athleticism to gain an early foothold in the match. Leg kicks, overhand rights and jabs were his weapons of choice. The bearded Belarusian held his own in tight quarters, only to have his chin betray him once more. Kharitonov wobbled him with a looping right hand and put him on his backside with another. Glassy eyed and wounded, Arlovski tried to defend himself from his back, but a booming left hand short-circuited his senses and sent him to a fourth consecutive defeat.

“Andrei is a very tough fighter,” Kharitonov said. “I hope we will become friends. I respect his skills, and I respect him as a person.”

Many view Kharitonov, a 30-year-old Golden Glory representative, as a potential darkhorse in the eight-man draw.

“I could care less what the experts think,” he said. “I know I’m going to win this tournament.”

Shane del Rosario kept his undefeated record intact, as he submitted Lavar Johnson with a first-round armbar in their heavyweight grand prix reserve bout. The end came 4:31 into round one.

Del Rosario survived a first-minute takedown and some heavy blows from Johnson, who entered the cage on a seven-fight winning streak. The Laguna Niguel, Calif., native scored with a takedown into side control, moved to mount and went to work with his ground-and-pound. Johnson could not shake the position and absorbed a series of unanswered blows from the top. With his wilting opponent’s arm there for the taking, Del Rosario cinched the armbar and coaxed a quick tapout.

“I knew he would come out pressuring me,” said Del Rosario, who improved to 3-0 under the Strikeforce banner. “It’s my first fight in seven months, so it was a little tougher than I thought it would be. He hit me with some good shots. He took me down, but I kept my composure and [took] the armbar.” 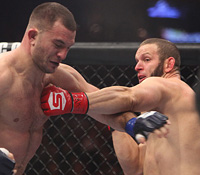 The two men exchanged wildly from the start, as Griggs wobbled the Long Island, N.Y., native and gained a quick advantage. Villante did not go quietly, as he put his stout heart and chin on full display. He ruptured Griggs left ear with a head kick, but the opening was fleeting. Griggs dropped Villante twice with a pair of brutal right hands, the second leveling him against the cage. “The Grave Digger” polished off the defenseless former Ring of Combat heavyweight champion with a series of ground strikes.

Griggs, a Don Frye protégé who burst on the scene in 2010 with his upset of one-time World Wrestling Entertainment superstar Bobby Lashley, has won five in a row.

Overeem submitted the decorated New Zealand kickboxer with a neck crank 1:37 into their heavyweight grand prix reserve bout. Sefo was effective on the feet, firing lead left hooks, jabs, overhand rights and leg kicks at the heavily tattooed Dutchman. However, Overeem scored with a takedown against the cage, passed to side control and snatched the neck crank for the tapout.

Overeem, the older brother of Strikeforce heavyweight champion Alistair Overeem, has rattled off three consecutive victories. None of his last 12 bouts have reached the second round.