With three British fighters falling before the headliner, the hopes of an entire country rested on the shoulders of Michael Bisping, as he took on Yoshihiro Akiyama in the featured attraction at UFC 120 on Saturday at the O2 Arena in London.

Bisping, now 16-0 on British soil, did not disappoint, as he earned a unanimous decision along with the adulation of the home crowd.

As the fight began, Akiyama looked to be in a hurry to end it, landing a dynamite right hand that wobbled Bisping less than a minute into round one. The judoka continued to find his range standing, popping Bisping with a counter left hook, followed by a stiff jab. Stunningly, Bisping scored a takedown on “Sexyama,” but the Japanese fighter popped right back to his feet. After the men exchanged accidental low blows, both of which referee Marc Goddard missed, Bisping started to press the action and the crowd started to rumble. Akiyama tried a spinning back fist, but he caught nothing but air, and “The Count” delivered a beautiful flying knee to end the round.

“Yeah, he hit me with [that right hand], and I was seeing double,” said Bisping. “I couldn’t see anything out of this eye. I thought, ‘Oh s--t. That’s not a good start.’”

Round two saw both men open up standing before the Englishman was hit with an accidental eye poke. The Wolfslair Academy product recovered and began to double up on his jab and throw his one-two, searching for Akiyama’s chin. After failing on a takedown attempt, Bisping landed a crisp straight right hand, but the K-1 veteran ate it like it was nothing about which to write home. Akiyama continued to wade forward with big blows, but Bisping countered with precision, landing straight punches. The judo player would not go quietly, however, as he lit up Bisping with a right hand and followed up with combinations as the round came to a close.

“Akiyama is a good fighter, but I believed in my skills and my training,” said Bisping. “Thank you, England.”

The crowd cheered wildly as the final frame began. Bisping delivered four sharp right hands to start the round, but Akiyama would not budge. In an unfortunate circumstance, Akiyama stepped into a Bisping inside leg kick, and the blow landed squarely on his cup. The Dream veteran managed to recover, and Bisping apologized profusely for the illegal strike. The two middleweights picked up where they left off, with Akiyama winging wild punches and Bisping countering with straights. As the round wore down, Bisping took control, landing crisp right hands almost at will.

“I’m training my ass off. Regardless of what people say on the Internet, nobody works harder than me,” said “The Ultimate Fighter” Season 3 winner. “They think I’m full of my own s--t. I’m not. I work hard.”

Carlos Condit delivered what many may view as a career-defining performance in the co-main event, as he knocked out the heavy-handed Dan Hardy in the first round of their pivotal welterweight clash.

“I feel great. Was awesome to fight for fans here, even though they’re booing me. Dan Hardy is a great competitor. Hats off to him -- great respect,” said Condit. “I feel comfortable on my feet, and if the thing had gone to ground, I would have done well there, too.”

At the outset, the crowd almost immediately began chanting Hardy’s name. The fighters exchanged hard leg kicks, and Hardy followed with a left hook. As the round wore on, both men had success standing. Hardy was perhaps more aggressive, however, finding a home for his counter left hook until he got caught with a colossal left from Condit.

“I got punched in the face. Sorry guys. Next time,” said a frank Hardy, as the crowd still cheered him in defeat. “That’s why it’s a sport. You can win or lose at any point. I’ll go home and watch it. I’ll see where I went wrong and learn from it.”

The two welterweights threw hard left hooks simultaneously, but it was Condit’s fist that connected first. The Greg Jackson-trained New Mexican followed up on the ground, but it was unnecessary, as Hardy was only semi-conscious as he hit the floor. Referee Dan Miragliotta pulled “The Natural Born Killer” off of a defeated Hardy 4:27 into round one.

“I was worried about his left hand. I know he’s got a lot of power,” said Condit. “I trained quite a bit for [his left hook], and there you have [the results].” 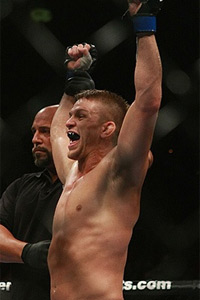 File Photo
Pyle scored an upset at UFC 120.
Mike Pyle put John Hathaway in unfamiliar territory, as he outwrestled the London Shootfighters product and ended his undefeated streak via unanimous decision. All three judges scored it 30-27 for Pyle.

Both fighters came out cautious early, but it was not long before Pyle shot a hard double-leg and put Hathaway on his back. “The Hitman” wall-walked nicely, however, and reversed the position before Pyle bailed altogether and the fighters stood. Hathaway took the center of the cage, but Pyle continually found a home for his right hand, rocking the Brit midway through the round. The Xtreme Couture rep continued to settle in, looking relaxed and throwing Hathaway to the floor to end the frame.

Looking to erase the judges’ memories of the first round, Hathaway came out aggressive in the second. Pyle, however, met his aggression in stride, first trying for a takedown and then landing a right hand. Hathaway found his range midway through the round, scoring with a nice combination.

Pyle had none of it, as the former World Extreme Cagefighting welterweight champion executed a beautiful throw and locked up a mounted triangle from side control. The 35-year-old dropped heavy elbows and punches on the Brit for the last two minutes, even as the crowd cheered on Hathaway.

Round three was again all Pyle, despite Hathaway landing a sharp right hand to start the period. Pyle took down “The Hitman” and, soon after, passed to side control. Though Hathaway recovered guard, he could not get back to his feet, and Pyle ended the round on top, delivering ground-and-pound to the face of the battered Brit.

Cheick Kongo should not have grabbed Travis Browne’s shorts.

In a close heavyweight fight, Kongo was penalized in the third round for the infraction and effectively ended up giving the fight away. All three judges saw the fight as a 28-28 draw.

Browne hit the cage loose, winging punches from his hip and looking for an early knockout. Kongo was content to stay on the outside, attacking mainly with leg kicks and looking to counter. The Bellator Fighting Championships veteran continued to bull forward, with Kongo unable to find a clean opening. The Frenchman decided to turn the tables and become the aggressor, only to be met with a hard counter from Browne that wobbled him. Kongo seemed to regain his composure at the end of the round, however, throwing some combinations and pressing Browne against the fence.

Kongo’s confidence carried over to the second round, where he landed two hard straight right hands before catching Browne with an accidental knee to the groin. After recovering, Browne continued to throw wildly, and the Frenchman started to find the range with his counters. The Alliance Training Center product took some heavy breaths midway through the frame, as Kongo softened up his foe’s legs with short knees against the cage. Kongo continued to work his clinch game as the round wore down, battering the inside of Browne’s right knee. The American did, however, score a takedown as the period ended.

Browne again bulled ahead in the third stanza, locking up a clinch and pressing the Frenchman against the cage. After ignoring multiple warnings from the referee for grabbing Browne’s shorts, Kongo was finally penalized a point for the infraction. Recognizing his deficit on the cards, the Wolfslair Academy product charged forward, standing in the pocket and throwing powerful hooks at Browne’s skull. He could not find the range, however, and Browne executed a nice takedown to end the fight.

Claude Patrick spoiled the homecoming of Englishman James Wilks, as he earned a unanimous decision victory and extended his winning streak to 12 fights in a featured welterweight tilt. All three judges scored it 30-27 for Patrick.

After a brief feeling-out process in round one, Patrick charged forward with punches and secured a body lock, using an outside leg trip to put the Briton on his back. Wilks proved crafty from the bottom, however, as his legs crept up the Canadian’s back while he worked a high guard. The Brazilian jiu-jitsu brown belt eventually passed Wilks’ guard and secured the mount twice in the first round, dropping ground-and-pound on the former Gladiator Challenge welterweight champion and cutting him below his right eye.

Wilks was the aggressor early in round two before running into a Patrick left hand. After following with a left elbow, the Elite Training Center product once again scored double under hooks and put Wilks on his back. From there, the Canadian continued to dominate, mauling the Brit from his guard and fending off increasingly futile submission attempts. Round three brought more of the same, as “The Prince” took down Wilks and smothered him with top control, all the while neutralizing Wilks’ active bottom game.