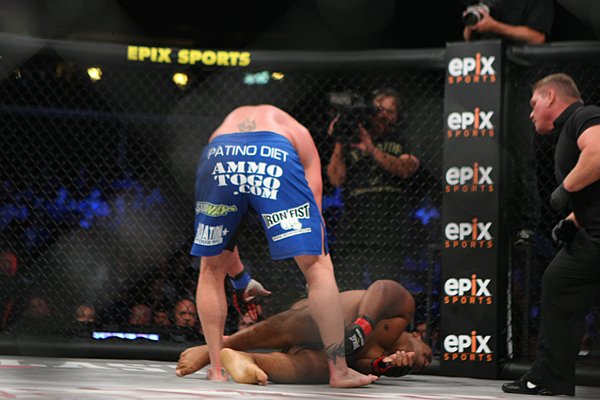 The only possible resolution to the shambolic rivalry between Bellator Fighting championships heavyweights Eric Prindle and Thiago Santos was surely a bizarre one. That is precisely what the crowd inside The Venue at Hammond, Ind.’s Horseshoe Casino got Friday at Bellator 75, as groin trauma again cropped up in the heavyweight feud.

Santos wound up face down, clutching his testicles in excruciating pain, but nonetheless with a disqualification win in the first round and a berth in the semifinals of Bellator’s Season 7 heavyweight tournament.

Last November, the two squared off at Bellator 59 in Atlantic City, N.J., where Santos landed an awkward groin kick to the U.S. Army man from Ali-Inoki position in just 84 seconds. Eleven months later -- and nearly seven months since Santos’ flu-like symptoms and weight issues dashed their originally schedule rematch -- Prindle had a chance for revenge but perhaps took it too literally.

The Arizona native overcame early adversity as the American Top Team-trained Brazilian took him down, gained north-south position and quickly sought a choke. Prindle defended, only to have to fend off keylock and armbar attempts from the “Big Monster.” Finally after escaping mount, Prindle got to his feet and stood in the same position in which Santos stood above him nearly a year ago. Keith Mills
Santos had Prindle in
trouble from the start.
Inexplicably, the 36-year-old slugger drove a piercing axe kick straight into the Brazilian’s groin. Santos instantly rolled over, face down, and seemed to show zero intention of fighting again, even after a five-minute respite. Prindle was outwardly apologetic, but referee Gary Copeland was left with no choice but disqualify him at 4:54 of the first round, ending the fight in expectedly strange fashion.

In a lopsided and embarrassing decision loss, Brett Rogers was used for target practice by Russian upstart Alexander Volkov, whose rangy kickboxing repeatedly stuck and skewered the sluggish Minnesotan for 15 minutes in their tournament quarterfinal.

Though Rogers offered at least some measure of offense in the first round, the Strikeforce veteran -- who was once thought at least an interesting, exciting heavyweight prospect -- threw almost no serious strikes over the final 10 minutes. Volkov’s long jabs, hooks and uppercuts smashed Rogers to the face and body as “Da Grim” was in constant retreat.

The bout ended with perfunctory 30-27 scorecards, though 30-25s might have been easily called for. The 23-year-old Volkov improves his mark to 17-3, while Rogers, now 12-4 with a no contest, has just two wins in his last seven outings.

The Brazilian, who was cut from the UFC after a disappointing loss to Rob Broughton at UFC 120 in October 2010 and a subsequent positive steroid test, was on the ropes early after Holata crushed his jaw with a mammoth left hook. Queiroz hit the ground and looked like he was a goner, but he managed to retain his wits and guard. From there, the 6-foot-7 Brazilian slowly turned his hips, looking for a triangle choke before switching to the fight-ending armbar at 3:26 of the bout, moving to 6-2 in his career. “Rare Breed” connected with left crosses and right uppercuts almost immediately, bashing the Arkansas native to the canvas. Hale claimed back mount and punched away until referee Marc Fennell was forced into action just 79 seconds into the contest, punching his ticket to the semifinals.

Following the event, Bellator CEO Bjorn Rebney announced that the heavyweight tournament semifinals would take place at Bellator 79 on Nov. 2 in Rama, Ontario, Canada, with Hale squaring off with Santos and Volkov meeting de Queiroz.

In undercard action, Colorado’s Ryan Martinez overcame a point deduction for low blows to earn a majority decision (29-27, 29-27, 28-28) over Reign MMA’s Manny Lara in a heavyweight tournament alternate bout. Martinez mixed up his brawling punches with heavy takedowns to stay in control for 15 minutes, upping his mark to 8-2.

Former WEC bantamweight champion Chase Beebe’s wrestling and top position grappling were far too much for Michigan’s David “Bo” Harris, as he was taken down at will and grounded beneath “The Rage,” who cruised to a workmanlike set of 30-27, 30-27 and 29-28 scorecards. K. Mills
Queiroz came back in a big way.
First-round rear-naked chokes were plentiful elsewhere: in local feature bouts, Schaumburg, Ill., welterweight Jason Graves earned his choke-out of Rafal Skibinski at 2:50, while Cedar Rapids, Iowa, native Cliff Wright got his squeeze on against Bobby Reardanz at 3:39 of the opening round.

Californian welterweight Joe Williams bested local Indiana favorite Rod Montoya, taking the back and choking out the Duneland Vale Tudo product at 3:17 of the first frame, while Chicago heavyweight Anthony Gomez got his own first-round rear-naked choke over Jose Medina at 2:32.