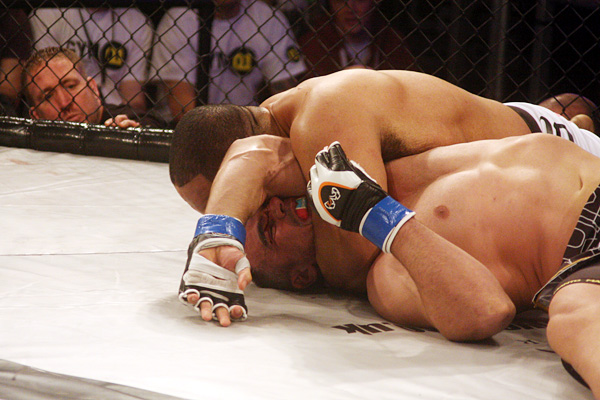 NORTH LONDON, England -- Bobby Brents made a huge statement with his arm-triangle choke submission victory over Rogent Lloret in the Cage Warriors Fighting Championship 45 main event on Saturday at the HMV Forum in Kentish Town.

All week the 5-foot-9 heavyweight, who had previously campaigned in the Midwestern United States, had been hyper-confident, claiming the only way his opponent could beat him would be if he brought a gun into the cage. Brents backed up the big talk in spectacular fashion.

Experienced M-1 Global and Bellator Fighting Championships veteran Lloret made the most of his reach advantage early on, popping out his jab. However, the “Zombie” kept coming, landing meatier strikes and scoring a couple of takedowns.

A looping right hand was the beginning of the end, as it made a solid connection and caused Lloret to fall. Brents went straight to him, moving smartly to side control before applying an arm-triangle. After a few seconds of resistance, the Brazilian jiu-jitsu black belt from Barcelona was forced to submit to the American at 4:41 of the first round. 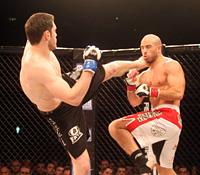 David Lethaby
Fields leveled Mason with a head kick.
Chris Fields booked a place in the final four of the Cage Warriors middleweight tournament with a lightning-fast finish in his quarterfinal.

The Irishman dropped Jack Mason with a head kick inside a minute. Although Mason was clearly in a discombobulated state, he appeared to be moving to defend himself from the subsequent hammer fists on the floor, but the referee had seen enough to wave the fight off 50 seconds after it began. Fields advances to fight John Phillips in the semifinals in Saudi Arabia on April 12. Phillips received a bye after his scheduled opponent, Tony Machado, of London Shootfighters, pulled out with a back injury.

It is an old story: up-and-coming Brit takes on American wrestler and spends the better part of 15 minutes on his back. At CWFC 45, the roles were played by Brad Wheeler and American Top Team product James Reese. Sometimes, the takedowns were spectacular, but they were mainly the bread-and-butter efforts that a born-and-bred wrestler can execute effortlessly. Although “J.P.” was unable to capitalize in the form of a finish, he dictated the shape of the fight and was rewarded with a shutout on the cards: 30-27 from all three judges.

SBG Ireland’s Conor McGregor came out with bad intentions, firing hurtful knees into Steve O’Keefe. The finish came 1:33 into the first round, when a salvo of elbows to the side of the head persuaded referee Marc Goddard to step in to save O’Keefe.

Eddy Bengtsson tried to win the support of any West Ham United football fans in the crowd by coming out to the East End Terrace anthem “I’m Forever Blowing Bubbles.” Like the man in the song, his dreams would soon fade and die.

The Swede wanted no part of Dave Keeley on the feet, taking down “The Iron Giant” at the earliest opportunity and looking for a submission. Things got ugly with Bengtsson apparently utilizing brute force rather than finesse in his quest for a tapout. Four minutes in, Keeley struggled to his feet, and, despite the fact he was in as a late replacement, the Rotherham product began to pile on the pressure. The strikes found their target, and the clearly spent Scandinavian soon crumbled, succumbing to elbows 4:40 into round one. 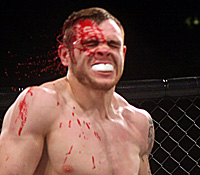 D. Lethaby
Sizeland caught Bassett with an elbow.
During the highly entertaining battle for position between Brett Sizeland and Brett Bassett, it was a solitary elbow that made the difference. The blood flowed from a cut on Bassett’s head midway through the first frame. The Londoner soldiered on and survived one appointment with the doctor, but the inevitable stoppage came in the second and Sizeland took the technical knockout 1:47 into the period.

Jacek Toczydlowski outpointed Shah Hussain to the delight of the enthusiastic Polish contingent in the arena. After three grueling rounds, the judges all saw it two round to one in his favor, posting matching 29-28 scores.

Kentish Town product Charlie Watts tried to establish a rhythm early on but could not quite catch up with the pot-shotting Chad Brown. In the second, Watts upped the tempo, and his elbows from mount had enough venom to have Brown looking for a way out. Watts won by way of submission due to strikes 2:12 into round two.

In the first professional fight on the card, Ben Hajir neatly transitioned into an armbar to defeat debutant Michael Jones by submission 3:06 into the third round.