Jon Jones handed Mauricio “Shogun” Rua a savage beating in the UFC 128 headliner, as he captured the light heavyweight championship in a third-round technical knockout on Saturday at the Prudential Center in Newark, N.J. Beaten almost beyond recognition, the great Rua finally wilted 2:37 into round three.

“It feels so good,” said Jones, who, at 23, became the youngest UFC champion in history. “It’s a testament that dreams do come true. Believe in yourself, and once you get there, don’t slow down. It comes true, everybody.”

Shogun never had a chance. Jones secured his first takedown inside the first 30 seconds and patiently brutalized the Brazilian with punches and elbows. Rua stood near the cage, ate a knee to the body, a shin to the face and punches to the head. He wobbled forward and was never the same. Jones landed one of his patented spinning back elbows to open round two, caught an attempted leg kick and drove Rua to the ground, where elbows and punches to the head and body greeted the battered and broken champion. So complete was Jones’ dominance that he attempted a kneebar on the Brazilian jiu-jitsu black belt near the end of the period.

At the start of round three, it was clear Shogun had little left in the tank. He swooped in for a leg lock, only to wind up on his back. There, he was at the mercy of the challenger. Shogun returned to a standing position, as Jones backed him into the cage and cracked him with a mean left hook to the body that put him down for good. With that, Jones’ ascent was complete.

“It means a lot to me, but now I know I have a huge target on my back,” Jones said. “And when you guys come and strike at me, I’ll be ready to strike right back.”

“The strategy was to fight him anywhere the fight would go,” Rua said. “I have to congratulate him. He was better than me. He is a very tough guy, and he showed great muay Thai and ground work. He is the man.”

Former light heavyweight champion Rashad Evans, who trains with Jones at Jackson’s Mixed Martial Arts in Albuquerque, N.M., entered the cage afterward. Recovering from a knee injury, he appears to be next in line to challenge for the belt.

“Well, I guess you should never say never, right?” Evans said. “We train together, but he’s got that strap, and I have to go after it.”

“We are teammates, and it sucks that we’re going to have to do this, but this is my dream,” he said. “This is everything I believe in. I have to do exactly what I have to do.”

Urijah Faber outworked, outmaneuvered and ultimately outclassed Eddie Wineland in a competitive battle between former WEC champions, as he earned a unanimous verdict from the cageside judges in the co-main event. Scores were 29-28 across the board for Faber, who made a successful if not memorable UFC debut.

Wineland enjoyed early success, as he stuffed Faber’s repeated takedown attempts in the first round, walked through a pair of heavy overhand rights and worked effectively from the clinch.

“I felt pretty good,” Faber said. “Eddie is really tough. He caught me off guard coming with the clinch as much as he did. Eddie is a young guy. He has a bright future here.”

Faber found his stride in round two, as he delivered his first takedown and attacked with elbows from the top and standing-to-ground punches from inside his foe’s guard. He carried his momentum into the third, where his quick hands began to take their toll on Wineland. “The California Kid” sealed it with a takedown with a little more than a minute remaining.

“You don’t know how fast or how powerful someone is until you get right in front of them, so I was gauging that,” Faber said. “I felt comfortable standing in front of him and then tagging him defensively. I would have liked to have gotten the finish, guys. I’ll be back, and I’ll be stronger than ever.” 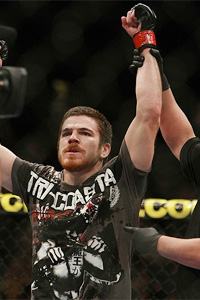 “That’s seven in a row in arguably the toughest division in the UFC,” Miller said. “I’m ready [for a title shot]. I come in here and I fight my heart out.”

Miller picked apart Shalorus with clean, technical strikes, but it took some time to chop down the rugged Texas-based Iranian. The AMA Fight Club representative spent more than half the second round on Shalorus’ back after a successful single-leg takedown, working for a choke.

“Kamal is as tough as a coffin nail,” Miller said. “I hit him so hard. I might have cracked something in my hand. He’s got a hard head.”

Shalorus survived, but his outing took a turn for the worse in the third. The 27-year-old Miller connected with a beautiful uppercut and backed it up with a ringing knee that realigned his foe’s nose. Follow up punches went unanswered, and the referee intervened on Shalorus’ behalf. Miller owns a 9-1 mark in the UFC.

One-time UFC middleweight title contender Nate Marquardt took care of business against a game but overmatched Dan Miller, as he outpointed the former International Fight League champion en route to a clear-cut unanimous decision. All three judges scored it 30-27 for Marquardt, who won for the 10th time in 14 Octagon appearances.

Marquardt fought through a pair of guillotine attempts and a bloodied lip. The 31-year-old Grudge Training Center representative utilized a multi-pronged standup attack, made Miller pay when they went to the ground and peppered his foe with one straight right after another throughout their 15-minute encounter. By the time the fight reached the third round, blood was streaming down the left side of Miller’s face.

A former middleweight King of Pancrase, Marquardt entered the cage in need of a victory, having lost two of his last three bouts. The Lander, Wyo., native was originally scheduled to meet Yoshihiro Akiyama, who withdrew from the event after a catastrophic earthquake and tsunami struck Japan on March 11.

“The Ultimate Fighter” Season 10 finalist Brendan Schaub stuck another important feather in his cap, as he knocked out Mirko “Cro Cop” Filipovic with a clubbing right hand 3:44 into the third round of their featured heavyweight scrap.

Schaub and Filipovic spent a significant portion of their encounter in the clinch, trading blows and positions. Schaub, the larger man and the superior athlete, delivered takedowns in every round and more than held his own standing against the 2006 Pride Fighting Championships open weight grand prix winner. Schaub did not escape the bout unscathed, as Cro Cop opened a cut on his left eyelid and bloodied his nose with a nice close-quarters elbow.

“I just keep getting more and more experience,” Schaub said. “I got to showcase my wrestling in this one, because Mirko is so dangerous [standing].”

Round three seemed to be following a similar pattern, until Schaub felled the Croatian with a right hand behind the ear. Cro Cop fell awkwardly onto his shoulder, his right arm pinned behind his back, and Schaub polished him off with another right on the ground.

“That’s what we were drilling all day in camp,” Schaub said. “I wanted to get him to kick. He didn’t kick that much, but it paid off in the end.”