He won, but Borys Mankowski's homecoming at KSW 30 was flat. | Piotr Pedziszewski/Sherdog.com


KSW welterweight champion Borys Mankowski notched his second successful title defense, but the Poznan native was none too pleased with how he closed the show at KSW 30 in front of his hometown crowd.

Mankowski (17-5-1) took a unanimous verdict (30-27, 29-28, 29-28) over Iranian-born Norwegian Mohsen Bahari (8-3) inside Arena Poznan, controlling the first 10 minutes of the bout with selective punch rushes and liberal takedowns, but struggled to get much offense going and certainly didn't resemble the fighter who ran roughshod over his last three opponents. As Mankowski tired in the third, Bahari landed a series of hard counter punches and ensured the champion ended the fight looking flat.

Despite earning the deserved decision, the 25-year-old sat on the canvas visibly displeased after the verdict was read and even offered his winner's trophy to Bahari before raising his opponent's arm skyward, as if he were the victor.

Faria (15-5-1) put Kowalkiewicz in the most serious adversity of her young career, taking her back standing with 30 seconds left in the first frame, dragging her to the ground and legitimately threatening with a rear-naked choke. Kowalkiewicz found her groove in the second round, however, as she used her brilliant jab and crafty counterpunching to stunt Faria's aggressive salvos. The Gracie Barra Lodz product shut Faria down in the clinch over the final two rounds, while consistently busting her face with short, accurate punches at range. Faria still landed quality strikes on the defensively-savvy Kowalkiewicz, but by the bout's conclusion, Faria's face was a swollen and bloody mess. Judges David Lethaby and Leszek Pawlega both saw the fight 29-28 for Kowalkiewicz, while Ben Cartlidge gave the third round and the bout to Faria.

While Faria weighed in on Friday at 117 pounds and forfeited 30 percent of her purse, the fight was never intended as a championship bout for Kowalkiewicz's KSW strawweight title, as Faria only signed a one-fight deal with KSW and has an active contract with World Series of Fighting. Kowalkiewicz may get the chance to add another title to her trophy case soon, however, as the 29-year-old figures to be a future challenger for Invicta FC champion Katja Kankaanpaa later this year. 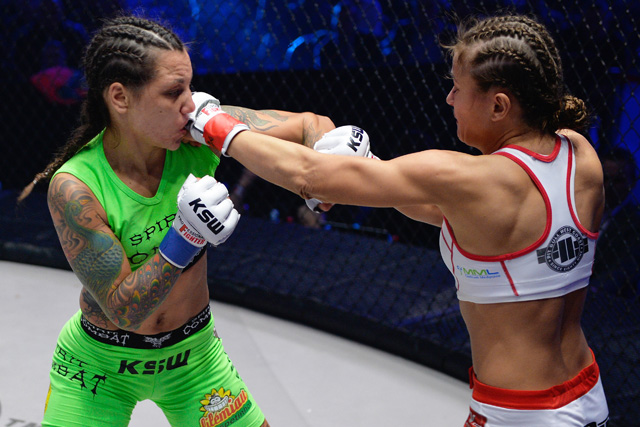 (+ Enlarge) | Photo: P. Pedziszewski/Sherdog.com
Kowalkiewicz's expert jab carried her
to a crucial victory.
Another unbeaten KSW prospect, Mateusz Gamrot (9-0), also needed a late surge to triumph over Brazilian lightweight Rodrigo Cavalheiro Correia (15-4). The 24-year-old Pole struggled with Correia's tricky, stance-switching striking and it was a chore to find takedowns. The Curitiba native briefly dropped Gamrot in the third round, and it looked like he might find a way to author an upset in enemy territory.

Instead, Gamrot slipped while throwing a head kick and in the ensuing scramble, got Correia's back standing. Correia locked up a kimura and pulled guard, only to have Gamrot escape, cut through his guard, take full mount and pound him out.

There were just six seconds left on the clock when referee Lukasz Porebski intervened, giving “Gamer” his ninth pro win.

Not all of the promotion's coveted prospects were so lucky, however, as featherweight Anzor Azhiev (5-2, 1 NC) was upended by the sneakily skillful Kleber Koike Erbst (15-3-1). Despite training at a competition-oriented BJJ school like Team Bonsai in Hamamatsu, Japan, the unheralded Erbst showed off clean striking, catching Azhiev off-guard with his jab before dropping him with a punch. The knockdown forced Azhiev (5-2) to try to take the bout to the mat, but when he did, he was instantly baited into a triangle choke by Erbst, who has now won 12 consecutive bouts.

After dropping the KSW welterweight crown to Borys Mankowski at KSW 27 last May, Aslambek Saidov (16-4) got back on the winning track, shutting out Rafal Moks (10-7) on the scorecards with three 30-27 tallies. Saidov was economical on the feet, easily defended Moks' leglock attacks and soundly pounded away from top position in all three rounds. The win is Saidov's second over the former M-1 champion Moks, who he bested by majority decision at KSW 17 in November 2011.

Unbeaten heavyweight Michal Wlodarek kept his record perfect with a unanimous verdict (30-27, 30-27, 29-28) over Szymon Bajor (14-6). The brawny “Komar” had his left eye busted open by Bajor, but landed the majority of the clean, hard punches in addition to spending portions of the contest in top position, pounding away.

In a pairing of young lightweights both under the Ankos Zapasy banner, the Warsaw branch's Jakub Kowalewicz (6-1) triumphed over the flagship Poznan gym's Lukasz Rajewski (2-2). The 21-year-old Kowalewicz caught a Rajewski head kick, slammed him to the mat, took the back and got the rear-naked choke win in a snappy 3:05.

In the card's curtain jerker, Kamil Gniadek and Mateusz Zawadzki fought to a split draw. After 15 contentious minutes, judge Ben Cartlidge scored the fight 29-28 for Gniadek (8-3-1, 1 NC), while Leszek Pawlega had it 30-28 for Zawadski (10-2-2). Deciding judge Cezary Wojciechowski saw it a 29-29 draw with an even third round.