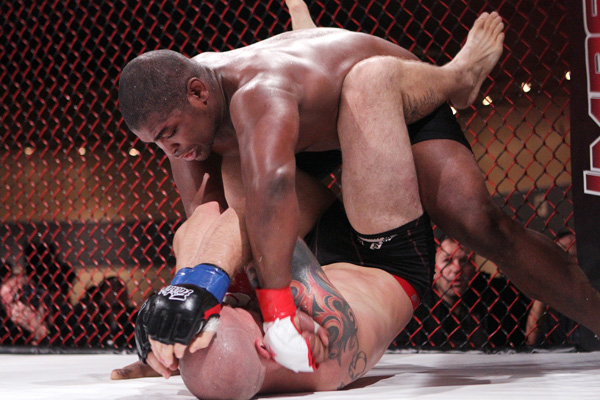 
PLEASANTON, Calif. -- With its inaugural show Saturday at the Alameda County Fairgrounds, Impact MMA provided an evening full of submissions and strange stoppages.

Cesar Gracie-trained 205-pounder Roy Boughton earned a second-round stoppage win over veteran Jeremy Freitag in the main event. Boughton refused to exchange on the feet, instead opting to dominate in the grappling department. Freitag had no answers for the Concord native’s takedowns and smothering top game, and Boughton did not let up after taking control early.

Freitag threatened briefly with an armbar early in the second round, but after that had little to offer. Boughton seized his opponent’s back late in the round and threw mostly deflected punches. While Freitag turtled and looked to be scooting out the back door, referee John Schorle stepped in and called a halt to the bout. Freitag protested the stop at first but was not overly argumentative.

“He’s a strong guy,” Boughton said of Freitag after the fight. “I just tried to keep him busy, keep him moving.” 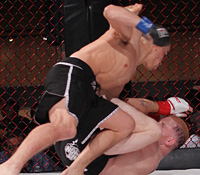 J. Sherwood
Sandoval (top) outworked McCorriston.
In the flyweight co-main event, Team Alpha Male fighter Hector Sandoval took a unanimous nod over Taylor McCorriston after three rounds. Sandoval came out confident, showboating with his hands by his sides and then holding them up to taunt his opponent in the style of Nick Diaz. In the end, Sandoval backed up his bravado -- kind of.

McCorriston sustained no real damage in the bout, but did find himself dominated positionally and running away during striking exchanges. When the fighters did engage, it was Sandoval who connected and forced McCorriston to retreat.

“I trained for this really hard,” said the victorious Sandoval, who trains alongside such UFC notables as Urijah Faber and Chad Mendes. “I got the best guys in the world.”

Bantamweight Jeremiah Labiano of Union City had an impressive pro debut against Derrick Easterling. Labiano controlled the fight with great takedown defense and solid striking on both the feet and the floor. In the second round, the Crispim BJJ fighter had Easterling on the run with knee strikes when referee Ray Balowitz stepped in and stopped the fight at the 2:04 mark. Although Easterling was retreating at the time of the stoppage, it was clear that he was far from finished. 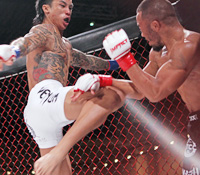 J. Sherwood
Labiano (left) stopped Easterling.
American Kickboxing Academy featherweight Noad “Neo” Lahat was aggressive enough to convince referee Balowitz to halt his fight against Xtreme Couture’s Rodney Rhoden at 2:31 of the second round. Lahat forced the action and had “The Bakersfield Kid” pressed against the fence, where Lahat threw knees which bounced off Rhoden’s gloves. Rhoden did not appear hurt and was intelligently defending himself, but it was not enough for Balowitz. The crowd loudly booed the premature stoppage of an otherwise entertaining slugfest, but Lahat nonetheless improved to 6-0.


Another AKA fighter, Ron Keslar, dominated “Dr. Jekyll” James Chaney in their welterweight tilt for as long as it lasted. Keslar worked over Chaney against the cage, battering with uppercuts before reversing a takedown attempt and landing on top. From there, Keslar unloaded with punches and elbows from half-guard for the remainder of the round. Chaney was bleeding badly when the fighters separated and the fight was waved off after the cageside physician deemed Chaney’s cuts too severe to continue.

Light heavyweight Omar Kasdi wasted little time in submitting Andres Salas with an arm-triangle choke. Kasdi took down Salas, sunk the choke and forced the tap only 67 seconds into the first round.

Ralph Gracie fighter Marcel Fortuna outpointed Fairtex Gym’s Sean Pierre in their 205-pound bout. Ground specialist Fortuna was unable to keep the fight on the mat when he got it there, but stayed active enough on the feet across three rounds to get the judges’ nods.

EliteXC veteran Carl Seumanutafa didn’t need long to finish his super-heavyweight contest against C.J. Leveque, polishing off “The Knight” with punches at 2:20 of the opening round.

AKA product Davin Clark impressed, submitting Rich Rigmaden via arm-triangle at 2:59 of round one, while Jared Hess kicked off the evening by submitting Tallis Lymuel with a rear-naked choke at the 2:55 mark.