A heavy underdog despite his perfect professional record, Bowles (8-0) dropped the oncoming Torres with a short right hook and then smashed away at him until he was unconscious on the ground at WEC 42 “Torres vs. Bowles” on Sunday at the Hard Rock Hotel and Casino in Las Vegas.

Torres (37-2), who had not lost in almost six years and had never been finished in 38 previous bouts, ate several wicked right and left hands on the ground. The decisive stoppage left no doubt that Bowles had arrived as the world’s premier bantamweight. Torres met his unsettling end 3:57 into the first round.

“I was just confident that I could win,” Bowles said. “I convinced myself that I could beat him. I just stayed calm. A lot of other people, I think, get caught up in the hype with him and are afraid of him. I just wasn’t worried about it. I put all that to the side.”

Bowles -- the soft-spoken West Virginia native based out of the American Top Team-affiliated Hardcore Gym in Athens, Ga. -- set the tone early, as he staggered Torres with a stout right hand in the opening moments of the fight. He later scored with a takedown and delivered some effective ground-and-pound before the two men returned to a standing position. Soon after, Torres clipped Bowles with a combination but left himself exposed as he pursued his backpedaling challenger. Bowles drew in Torres and landed a crisp right hook the marked the beginning of the end of his title reign.

“He had me rattled there pretty bad and I kind of recovered,” Bowles said. “I seen him coming in a little hard and just swung a good hook and hit him right on the jaw.”

Torres, the 28-year-old Carlson Gracie protégé who had won 17 in a row, had not tasted defeat since he lost a unanimous decision to Ryan Ackerman at an Ironheart Crown show in November 2003. 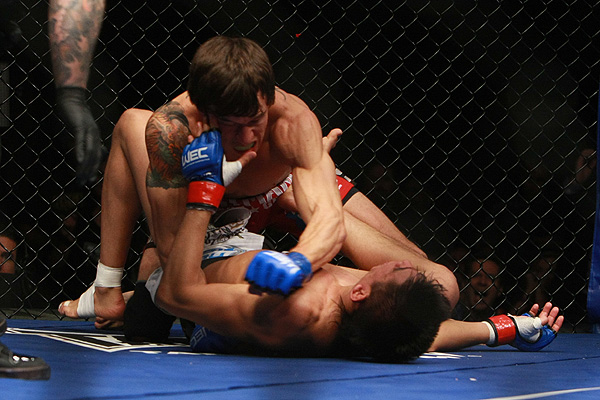 Dominick Cruz put the brakes on the march of Joseph Benavidez.

Cruz delivered the more effective strikes, kept Benavidez at bay with a considerable height and reach advantage and even scored with takedowns en route to a unanimous decision that likely moves him into title contention at 135 pounds. Scores were 30-27, 29-28 and 29-28.

A winner in five straight, Cruz (14-1) took down Benavidez in all three rounds and mounted him briefly in the first. The two-division Total Combat champion finished with a flurry, as he grounded Benavidez (10-1) late in the fight, secured back control with hooks in and landed strikes from behind.

Benavidez’s offense was mostly limited to wild exchanges and occasional head and leg kicks, but the Urijah Faber protégé failed to put together anything of consequence. Cruz, in control for much of the three-round battle, popped him with multiple combinations standing and matched his quickness and agility inside the cage.

Danny Castillo pinned the first professional defeat on Ricardo Lamas, as he stopped the Chicago-based lightweight on strikes 4:15 into the second round.

The two decorated collegiate wrestlers spent their entire encounter upright, as they traded blows to the body, head and legs throughout the bout. Lamas (6-1), though he appeared to win the opening round, ate a vicious straight right hand in the second that sent him careening into the cage. Castillo (8-1) followed with strikes on the ground for the finish, as the previously unbeaten Lamas could not defend himself.

“He’s a tough opponent,” Castillo said. “I was running my combos. All thanks go to my corner. I train with the best team in the world.”

Spawned by Urijah Faber’s Team Alpha Male, Castillo has rattled off three consecutive victories since his submission loss to Donald Cerrone 14 months ago.

Takeya Mizugaki handed Jeff Curran his fourth consecutive loss, as he notched a split decision against the seasoned Brazilian jiu-jitsu black belt. Two of the three judges sided with Mizugaki by 29-28 counts; a third scored it 29-28 for Curran.

Mizugaki (12-3-2) bullied the smaller Curran for much of the match, as he scored with takedowns in each round and peppered him with ground-and-pound from the top.

Curran (29-12-1) threatened with numerous submissions and came within an eyelash of finishing his Japanese counterpart near the end of the third round. He swept Mizugaki into a triangle from the bottom, tightened the choke and eventually rolled to the top. Mizugaki refused to submit, however, and persevered through the triangle, the final horn likely saving him from defeat.

“It was a deep in triangle,” Mizugaki said. “The only thing that got me out of that triangle is my heart.”

The 25-year-old Cage Force veteran, who went five rounds with Torres in April, admitted he wants a second crack at the 135-pound championship.

“I think I moved one step closer to another title shot,” Mizugaki said.

In his first appearance since bowing to WEC featherweight champion Mike Thomas Brown, Leonard Garcia survived a considerable scare against Jameel Massouh and notched a split decision for his third victory in four fights. All three judges scored it 29-28, two of them in Garcia’s favor.

The 30-year-old Garcia (13-4) nearly ended the match midway through the first period, when one of his heavy right hands found its mark and dropped Massouh where he stood. However, the Pancrase veteran defended successfully, perhaps out of desperation, and recovered his senses in time to push the fight into the second round.

“After I hit him with that first right hand, I thought the fight was over,” Garcia said. “I got a real big adrenaline rush, and all the energy left my body.”

Massouh (21-6) capitalized on the weakened Garcia in round two, as he secured an early takedown and cinched a tight brabo choke. Garcia struggled to extract himself and appeared to lose consciousness briefly before Massouh released the choke and transitioned to his back.

“He was choking the piss out of me,” Garcia said. “I saw black a couple times.”

Garcia was never the same. The pace of both men slowed noticeably in the third and decisive round, as Garcia cut loose with wild power punches, most of which were either blocked or missed completely. Still, his aggression served him well and Massouh allowed a potential victory to slip through his fingers.