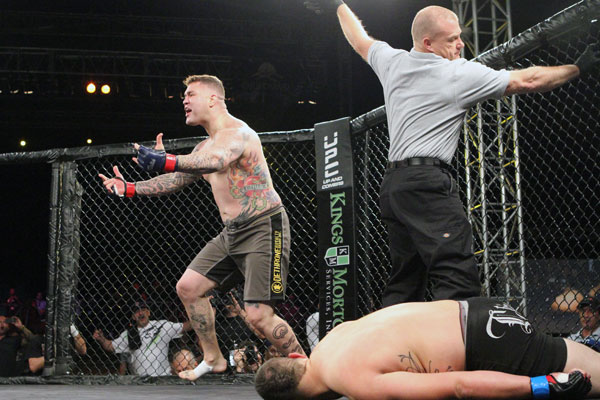 
COARSEGOLD, Cailf. -- Chukchanci Gold Hotel and Casino hosted Up & Comers 12 “Turning Point” in front of a packed house Saturday night. Only one fight made it out of the first round.

The main event featured Fresno’s Brandon Cash trying to turn around a three-fight losing streak against Porterville, Calif.,’s Javy Ayala. Cash did so in exciting fashion. 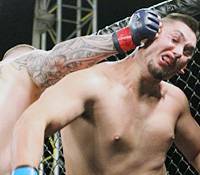 J. Sherwood/Sherdog.com
Cash (left) laid Ayala down and out.
Cash came out swinging and nailed Ayala with a hard right hand. The stunned Ayala immediately clinched and at took Cash down against the fence. Cash regained his feet, created distance, and began throwing his fists wildly. Ayala answered, winging punches back, but it was “Money” who was getting the better of the exchange.

The fighters separated for an instant and Cash smiled and signaled his opponent to bring it on. The Strikeforce veteran then pressed forward, throwing powerful combos that pressed his opponent against the cage. A left-right combo landed and out the outmatched Ayala fell face first to the canvas. The knockout unfolded just 31 seconds into the first round.

Paul Ruiz and Steve Urias went toe-to-toe in what was easily the fight of the night. 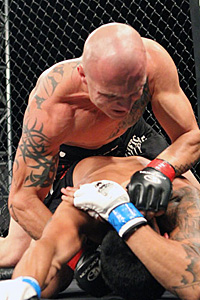 J. Sherwood/Sherdog.com
Eastom (top) took out Williams.
Both fighters backed up solid stand up with exciting submission attempts and ground transitions. Urias looked close to finishing twice with omoplata attempts, but “The Firebaugh Kid” defended well and controlled enough of the bout to earn a unanimous decision.

Tim Eastom needed only 18 seconds to dispatch Josh Williams. Eastom took his foe’s back standing against the cage and forced him down on all fours. Williams tapped immediately. Eastom and the crowd seemed confused until Williams pointed to his dislocated shoulder.

In earlier action Gabriel Carrasco, fighting out of American Kickboxing Academy, won by tapout via rear-naked choke against Tony Boyles.

Also on the card, Reece Brown improved his record to 1-1 with a 0:14 technical knockout win over the previously unbeaten Matt Salazar.