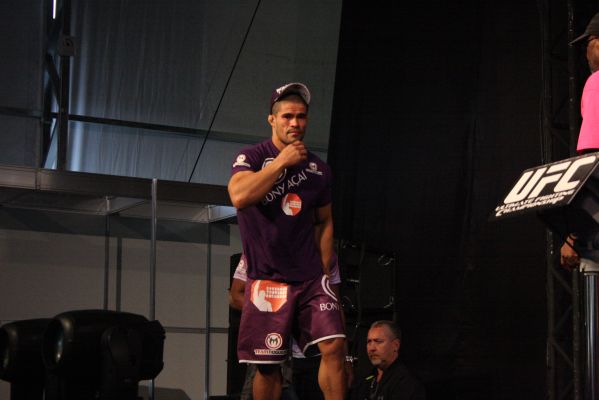 
In addition to being banned from the Ultimate Fighting Championship, Rousimar Palhares has received a 120-day suspension from the Brazilian MMA Athletic Commission (CABMMA) for his conduct at UFC Fight Night 29.

CABMMA officials announced the decision to Sherdog.com via email on Friday. UFC Fight Night 29 took place this past Wednesday at Jose Correa Gymnasium in Barueri, Sao Paulo, Brazil, and aired live on Fox Sports 1. Palhares made his welterweight debut against Pierce as part of the main card, submitting the 170-pound stalwart with a skillful heel hook in just 31 seconds.

However, Palhares did not immediately release the hold either when Pierce tapped out or referee Keith Peterson intervened to halt the contest. As a result, “Toquinho” was deprived of his “Submission of the Night” bonus and cut from the UFC roster by Dana White on Thursday.

In addition to his UFC ban, Palhares must also serve a 120-day disciplinary suspension at the conclusion of his 14-day medical suspension, according to CABMMA officials:

“After detailed analysis of the conduct of Rousimar Palhares in his bout at UFC Fight Night on Oct. 9, 2013, in the city of Barueri, we communicate the suspension of the athlete for a period of 120 days, counted from the end of the period of his medical suspension. The determination of the suspension period considered, among other aspects, the fact that this is not his first anti-sportsmanship attitude of the same nature.”

This incident marks the second time Palhares was disciplined for refusing to release a submission while fighting under the UFC banner. The 33-year-old was also suspended for 90 days by the New Jersey State Athletic Control Board back in 2010 after performing a similar action against Polish competitor Tomasz Drwal at UFC 111.