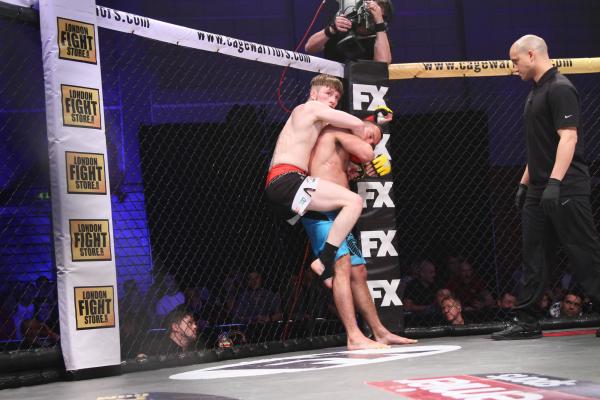 Instead of defending the bantamweight crown he captured by winning a four-man tournament at CWFC 59 last September, Johns was fighting for the right to win it back. “The Pikey” came in two pounds above the bantamweight limit at Friday’s weigh-ins, and as a result he was forced to vacate the belt. The best he could hope for with a win was to hold steady as the European promotion’s 135-pound No. 1 contender.

Only Brum was eligible to capture the title at the LC in Swansea, Wales, on Saturday, but Johns made sure that didn’t happen, ending Brum’s eight-fight winning streak in the process. Judge David Swann scored it 50-45, while Andy Sledge and David Swann each submitted 49-46 tallies -- all in favor of Johns.

“Please, give me that shot at that belt next, please. It was my mistake yesterday and I’m sorry,” Johns said after the bout. “Please give me that chance. It’s the greatest show in Europe.”

Johns (10-0) landed takedowns in every round, forcing Brum (14-3) to spend much of his time in the cage on the defensive. While Johns did not land a lot in the way of damaging ground-and-pound, he maintained control for the vast majority of the bout. Brum rarely had space to land any offense, but when he did, his aggression was usually quickly countered by a Johns level change.

With limited opportunities to stand and trade, Brum was simply unable to put his opponent in any significant danger.

“I know the last couple of fights James hasn’t really had a finish,” Johns said. “I’m surprised because he hits like a train. I’ll give him that.”

“It was a good fight. There was no finish, so that’s like a draw in my book. I’m a little bit disappointed,” Carter said.

In going the distance for just the second time in his pro career, Carter gradually asserted himself through clinches, takedowns and top control. Saeed’s best moment came in round one, when he hurt Carter with an upkick and then swarmed his foe against the fence with uppercuts and body shots. However, the BKK Fighters product was able to survive the assault and grind out a victory down the stretch.

Haque (5-1) was able to consistently land punching combinations and kicks to the legs and body for the entire 15-minute affair. He seated McDonough (11-5) with a left hand in round two and dropped the pink-haired competitor again late in round three, closing with a barrage of punches as the final frame expired. While McDonough continued to press forward throughout the contest, he was not able to match his opponent’s movement and work rate.

A resilient Jamie Pritchard submitted Phil Raeburn with a modified guillotine choke 3:32 into the second stanza of a 140-pound catch-weight bout. Raeburn (5-4) was the aggressor throughout, attacking with heavy punches on the feet and purposeful ground-and-pound on the mat, but his opportunistic foe would ultimately get the best of him.

Pritchard (6-3) spent much of the opening period attempting a heel hook but wound up eating a number of shots for his efforts. Raeburn controlled the majority of round two with a heavy dose of ground-and-pound, but Pritchard was able to turn the tables with the fight-ending choke.

A clinical grappling performance helped 19-year-old Agnieszka Niedzwiedz (6-0) remain unbeaten, as she submitted Gemma Hewitt with a triangle choke 3:59 into round one of their bantamweight bout. After landing a takedown near the fence, Niedzwiedz pulled guard and secured the triangle as Hewitt attempted to return to her feet. From there, the Pole rolled into mount and battered her foe with a variety of punches and elbows. While Hewitt (1-1) continued to try and roll out of danger, Niedzwiedz never released the hold and was eventually able to force the tapout.

Effective counterpunching carried Simas Norkus (3-2) to a technical knockout triumph over Stuart Tyrie in a light heavyweight affair. The bout was halted by a cageside doctor 2:35 into round two due to a number of lacerations around both of Tyrie’s eyes. It was the fourth TKO defeat via doctor stoppage in the 14-bout career of Tyrie (6-8).