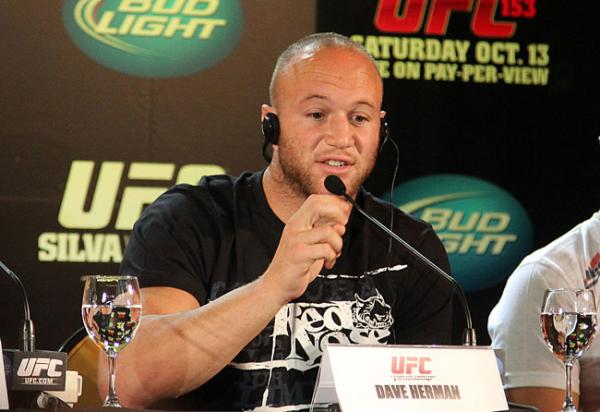 Dave Herman got back in the win column at Titan FC 28. | Sherdog.com


In a grinding, back-and-forth battle, Jason Brilz did just a little bit more.

Brilz took a hard-fought unanimous decision over Raphael Davis in the Titan Fighting Championship 28 headliner at the First Council Casino Hotel in Newkirk, Okla., on Friday night. Two judges scored the light heavyweight contest 29-28 in favor of Brilz (22-5-1), while a third saw it 29-28 for Davis (13-3).

As indicated by the scorecards, this one was far from easy for the Omaha, Neb., native. It was Davis who seized the upper hand early, landing a takedown halfway through the opening round and maintaining top control until the period ended. Brilz upped his aggression in the second, landing a pair of takedowns and threatening with two tight guillotines that Davis was eventually able to escape.

With the outcome in the balance, Brilz put his stamp on the fight during the second half of the third round by hammering away with short punches and elbows with Davis stuck on all fours near the cage. It was the fourth straight victory for Brilz, who exited the UFC on the heels of a three-bout skid in 2011.

In the evening’s co-main event, Dave Herman utilized a significant height and reach advantage to outpoint Kalib Starnes in a heavyweight clash. Two judges scored it 29-28 for “Pee Wee,” while another saw it 30-27 for the five-time UFC veteran.

While Starnes (16-9-1), who competed in the Octagon as a middleweight, was game, he was unable to consistently find the range on his punches against his 6-foot-5 adversary. Kicks to the body set the tone for Herman (22-6) in round one, as the former Team Quest member was able to remain on the outside in the opening five minutes.

Herman found a home for his left hand in the second stanza, at one point landing about five unanswered straight punches to Starnes’ mug. Starnes was a little busier with his boxing in the final frame, but he was unable land anything truly significant against Herman before the bell sounded.

Former college basketball player Walt Harris recovered nicely from a recent two-fight skid in the UFC, as he stopped Cage Warriors and Bellator veteran D.J. Linderman via TKO in the opening round of their heavyweight tilt. A right hook-left cross combination dropped “Da Protégé,” and a series of follow-up punches on the ground brought an end to the contest at the 4:12 mark of the period.

Harris (6-3) set up the finish by hurting his opponent with several powerful left hands over the course of the initial stanza. On wobbly legs for much of the frame, Linderman (15-8) held on for as long as he could against his taller, rangier opponent.

Superior grappling carried Daniel Roberts to a split verdict (28-29, 29-28, 30-27) over Brock Jardine in a welterweight matchup. Roberts improves to 15-5, while Jardine loses his third straight to fall to 9-4.

While Jardine preferred to keep the action standing, Roberts was able to achieve dominant positions in each round against the Orem, Utah, native. “Ninja” was able achieve full mount as well as take his foe’s back on multiple occasions, often as a result of Jardine becoming too reckless with his kicks. Jardine was able to push the pace and attack Roberts’ body with some success in round three, but by then it was too little, too late.

Brian Foster went the distance for the first time in 28 professional bouts, capturing a unanimous verdict over “The Ultimate Fighter 17” veteran Gilbert Smith in a welterweight showdown. All three cageside judges scored it 29-28 in favor of the Fiore MMA representative.

Foster (22-6) was the aggressor in the early going, attacking the larger Smith with punches and knees on the feet and submissions from his back when taken down. Smith briefly turned the tide in round two after landing an uppercut to Foster’s groin that was overlooked by referee Kevin Nix. With Foster doubled over in pain, the Coloradoan swarmed for the finish. However, Foster was ultimately able to survive his foe’s barrage.

“He caught me [with a low blow], but unfortunately the ref didn’t see it,” said Foster, who promised a move to lightweight after the bout. “Good for him to keep going. I would have.”

Smith (8-3) did his best work in the third, as he outmaneuvered and outgrappled Foster for the majority of the period. It was not enough to sway the scorecards.

Gleristone Santos (26-4) used a furious barrage of ground-and-pound to stop Grudge Training Center’s Alvin Robinson 4:51 into the second round of their featherweight clash. The Brazilian Top Team representative controlled the majority of the fight from top position, where he consistently battered his foe with punches and elbows.

“Toninho Furia” shifted gears in round two, when he took Robinson’s back and unloaded with a series of unanswered shots in the frame’s waning moments. With Robinson (13-8) offering little in the way of defense, Nix had no choice but to halt the bout.