As is typical, Henderson had his right hand cocked and ready from the get-go. Sobral ducked under one bomb early and tried to keep his distance as The Team Quest product attempted to close the gap. Henderson fired off a “Superman” punch, but “Babalu” rolled with it and avoided taking any damage. Henderson charged, winging haymakers and pushing Sobral against the cage.

The Brazilian shot for a takedown, but Henderson maintained top position, stacking Sobral and raining down vicious right hands that put the former Strikeforce champion to sleep. The brutal end came at 1:53 of round one.

Scott Smith’s welterweight debut did not disappoint, but not in the way that “Hands of Steel” would have preferred.

British bomber Paul Daley ended Smith’s night at 2:09 of the first round, knocking him out in spectacular fashion.

There was no feeling out process, as Daley winged a right hand immediately and got caught with a jab for his efforts. Smith appeared content in the early going to measure the distance, using his jab and lead leg as a rangefinder. Daley clipped him with a nice one-two about a minute in that dropped Smith, but “Hands of Steel” recovered quickly. As Smith moved forward, “Semtex” landed a tight left hook that staggered the UFC veteran.

Undeterred, Smith surged ahead and found himself on the receiving end of the exact same punch. There would be no recovery for the comeback kid this time, however, as Smith went limp before falling flat on his face as John McCarthy waved off the contest. 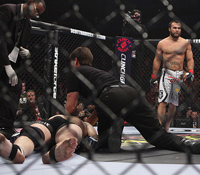 D. Mandel
Lawler knocked Lindland cold.
Matt Lindland’s night was over almost before it started, as “Ruthless” Robbie Lawler found the veteran’s chin less than a minute into the first round with a wicked right hook and followed the crumpling Team Quest founder to the mat, relieving Lindland of his consciousness with another bomb on the ground.

Both men came out quickly to start, engaging in the pocket. Lindland didn’t appear eager to clinch, and the 40-year old ended up paying for it. Lawler seemed intent on timing the Olympic silver medalist as he moved in, and missed on several attempts before finally hitting the jackpot with a colossal right hook.

Lindland still had his senses when he hit the floor, but as he turned to defend himself from further punishment, he was met with another Lawler fist. This marks the second devastating knockout Lindland has suffered in his last four fights.

The official time was 0:50 of the first.

After an early scare, former EliteXC heavyweight champion Antonio Silva took care of business, stopping a game but outmatched Mike Kyle in the second round of their heavyweight tilt.

Though Silva took the center of the cage to start, Kyle used his speed advantage to land two sharp right hands, the second of which dropped the massive Brazilian. Kyle pounced on his foe, throwing dozens of punches and hammer fists. The Brazilian jiu-jitsu black belt survived, however, and calmly recovered half guard.

As Silva shrimped, he tried to turn the position into a single-leg takedown, but Kyle’s base proved stout. The American Kickboxing Academy product bloodied Silva’s cheek before the larger man recovered full guard. From there, Kyle landed two comical -- though illegal -- headbutts to Silva’s abdomen and was admonished by referee John McCarthy.

Silva dove for a single to start round two, but Kyle stepped out of it before eating a right. The American Top Team representative shot again, this time securing the takedown and transitioning beautifully to the north-south position. As Kyle rolled to his stomach, Silva locked up what looked to be a fight-ending anaconda choke. To the American’s credit, he managed to escape the position, but Silva simply would not be denied. “Bigfoot” climbed on top of his foe, securing the mount and clobbering Kyle with sledgehammer blows until McCarthy stopped the contest at 2:49 of the round.

Neither man impressed to start, but St. Preux drew figurative first blood with a hard liver kick. Radach retaliated with a takedown, but the former University of Tennessee linebacker popped right back up. After both men traded blows standing, St. Preux took the fight to the floor, securing Radach’s back and landed powerfulpunches on the floor. After dishing out considerable punishment, the former Volunteer tried to end the fight with a rear-naked choke on two occasions. St. Preux looked puzzled at points, as referee Mike England refused to stop the contest.

Round two would bring more of the same, as mere seconds into the second frame, St. Preux dropped Radach with a short left hook and followed him to the ground, riding the knockout puncher and looking to dig in his hooks once Radach exposed his back.

In the third, Radach came out with something to prove. Fighting through exhaustion, the 30-year-old landed a heavy right hand that staggered St. Preux before eating a sharp left that dropped him to the canvas. From there, it was déjÃ  vu, as the Tennessean landed more punches on the canvas. A late stand up by England gave Radach hope, but it was too little too late.